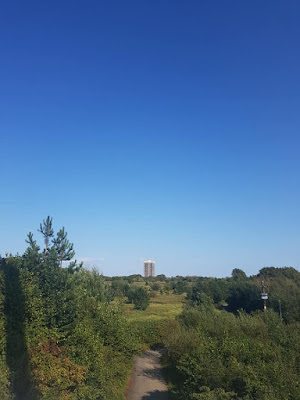 Andy Bell's solo album The View From Halfway Down came out out last month and has taken up residence on my stereo ever since, a delicious and blissful blend of shoegaze, electronics and psychedelia, taking it's cues from both his band Ride and his solo synth/ cosmische output as GLOK. The opening song and single Love Comes In Waves came out in the summer and I played it death, a slice of the eternal spring of 1989, the spirit of The Stone Roses from that specific period bottled. It's followed by Indica, seven minutes of backwards vocals, synths sounds and Spacemen 3 circa Recurring, layers of sounds over a pattering drumbeat and the tripped out delay of the voice. Side One closes with Skywalker (and this is best enjoyed as a proper vinyl album, four songs each side and flipped over halfway through). Skywalker is the sound of classic late 80s indie- rock crossed with blissed out psyche, guitar chords taking flight and Andy's voice surfacing from the dream, 'and then you tell me there are no more songs in the world left to be sung', before the second half of the song's looped bass part and ringing guitar line carry it home.

Side Two is equally fine- Cherry Cola has finger picking, folky guitar, a Beta Band bassline and a thin 60s vocal and distant harmonies. Closing song Heat Haze On Weyland Road ends the record with some shoegaze, a descending bassline and synth sounds, plenty of texture and the effect of waking up on a sunny day. It all sounds both intimate and expansive, as psychedelia should. Thoroughly recommended. As if all that weren't enough Cherry Cola has been remixed by Pye Corner Audio, an even more sun- dappled haze of colour and light, waves of sound, Andy's words floating over the top as the heartbeat drum pattern pumps on.

A strong contender for album of the year; it's guaranteed a podium finish, that's for sure.

This is very good isn't it? Might put the vinyl on my Xmas wish list, as it's nearly that time of year.

The album can be bought here...

It's just a fantastic album!

Adam, since the advent of New Blogger (Grrr) your Youtube videos only appear on the web version of your blog, not the mobile (i.e. nobody can see them on their phones). You need to change a bit of html code to enable it. It's quite easy - email me john at johnmedd dot com (or DM me on Twitter) and I'll tell you how.

Thanks John, will drop you a line.