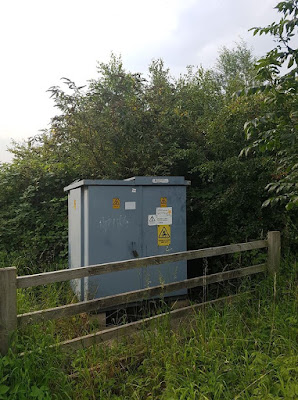 As well as the unreleased Andrew Weatherall remix they put out at the end of October, London/ Scotland art- rockers Django Django released some remixes back in 2016 for Record Shop Day including ones by Tim Burgess, Peaking Lights and Richard Fearless. I only discovered this e.p. recently having gone looking for the Weatherall one and it seems that this is the first time these have been available digitally, the RSD release being a 500 copies only vinyl release. The Richard Fearless remix is a peach, a repetitive, piano- house, post- acid house banger, built around two repeated parts- the first an ascending keyboard riff over thumping machine drums and the second a piano part pinched from the glory days that sends you to that happy/ sad place on the edge of the dancefloor, hedonism and a vague sense of regret in equal measure. Fearless switches between the two perfectly.

That is great that

Adam - I'm as much drawn by your photographs as I am your musical selections. The psychogeography fits your blog like a hand in glove. Do you hear a particular piece of music when you frame your photo? More details please; unless of course you think I'm being nosey...

I'm with John's comment - love your aesthetic and your visual/aural mix.

Not nosey at all John. I've always liked photography but in recent years having a decent smartphone camera has made it much easier to take photos. Several years ago I got bored of having pictures of the band/ artist with the daily post on the blog and used photos from the 1920s- 1960s for a couple of years but then that started to wear a bit thin so I decided to use my own pictures. Having my phone always on me meant I could stop and take a picture anywhere. I've always bene drawn to industrial architecture, mundane stuff like footbridges, pylons etc and for a while I took loads of photographs of electricity substations in the local area- stick with me here- and started to share them in a community facebook group. Lockdown this year has led to me walking far more than usual in the local area and I guess my radar is always on, my subconscious always on the lookout for subjects. This year I've noticed I've taken more photos of trees, skies, nature etc- maybe that's a reaction to being outside more or some response to Covid and being stuck indoors more.

The matching the images to the music/ content is less of a science. I save the photos to my hard drive and then they seem to suggest themselves to the music or the other way round. Sometimes I'm writing a post and I know there's a picture to go with it and sometimes it's more haphazard, sometimes it's luck- I post a picture with the music and then afterwards realise there's some kind link between them. I'm definitely into the idea of psychogeography, I think environment has a huge impact on the making of art and I guess by that extension it does on blogging too. If that's not overthinking it.

Thank you though, and C.

I also tend to linger over your chosen image of the day. I particularly like the fact that you rarely pass comment on the photos that top your posts, leaving us to make of them what we will.
Good tune today too.

Yes I really enjoy the pictures as well. Really evocative and atmospheric in a difficult year. I've also done a lot of walking in my local area this year and it's been great seeing the same buildings, roads and walkways in the changing seasons. A rare positive in this year of negativity.

Thank you for sharing, Adam. I totally agree - photography and music have kept me sane - not just thru Covid, but for most of my life. And, as you say, having a camera about your person 24/7 can only be a good thing. Thanks again. J