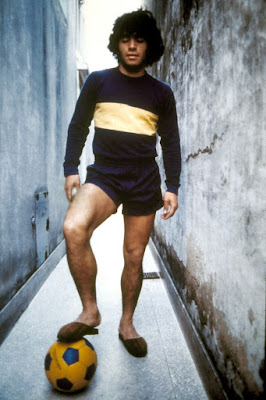 Diego Maradona died yesterday aged 60. I feared for him a few weeks ago when he was hospitalised with a blood clot on the brain but the surgery seemed to go well. A heart attack did for him in the end. In a way it's a marvel he lived as long as he did. His drug abuse and weight gain is well documented and anyone who watched the short documentary series about his time managing Mexican club Dorados will have seen the damage done to his body, some self- inflicted, some punishment meted out by defenders in Spain and Italy in the 1980s, punishment for being the most gifted footballer in the world, a man who on his day was unstoppable. He was a single handed force of nature. In 1986 he captained his national team to the world cup. In 1986- 7 he led Napoli to their first ever Serie A title at a time when the Italian league was the best and toughest in world football. He did it again and then took them to a UEFA cup win as well. In Napoli he found an underdog, a city and team who were the target of abuse from the northern giants of Juventus, Milan and Inter, emblematic of Italy's north- south divide. Naples and the south are sometimes referred to as Africa by the rest of Italy, which tells you a lot in lots of ways. In Napoli he is revered as a God, the man who gave the city a middle finger, plenty of tears, a week long party following their 1987 scudetto and some incredible football to wave in the faces of their rivals in the more sophisticated north. He also became so deeply entwined with the Naples mafia that his life began to spiral out of control. 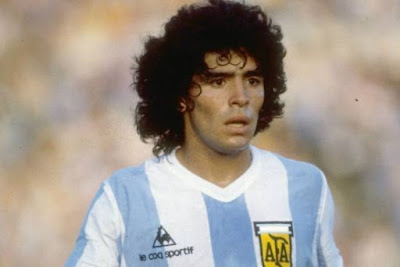 At some point in 1982 I found an Argentina shirt in the bargain bin of our local sports shop. I suspect it was in there due to the sheer unlikeliness of selling it at full price due to the Falklands War and getting £3 for it was better than nothing- but there it was, pale blue and white stripes, embroidered badge and Le Coq Sportif logo, the same as the one Diego is wearing above. I bought it. I was the only person I knew who had an Argentina shirt and to be honest it did wind people up a bit. In a PE lesson a teenage peer stood behind me, gave me a shove in the back and said 'I'll mark Galtieri'. On holiday once some kids threw stones at me. It didn't stop me wearing it until I outgrew it. Diego Maradona's rise and the shirt were somehow tied together for me. In 1984 I was at Old Trafford aged fourteen when United played Barcelona and Maradona. Barca were two- nil up from the first leg and we weren't given much of a chance of winning the tie. Old Trafford was filled that night, fifty- five thousand and the place was bouncing from long before kick off. European football was a rarity in those days for Manchester United fans and I think it was my first night game too, the floodlights giving everything extra drama. United won three- nil, incredibly, and Diego barely got a kick. But I saw him play and I've loved him since around then.

Englishmen aren't supposed to love Diego Maradona. They're supposed to hate him for the crime of handball in 1986, a goal which played its part in knocking England out of the world cup. Diego said that in South America the art of getting away with it, of fooling the referee and the opposition is part of the game. To northern Europeans, it is cheating and that's that. The second goal he scored that day where Diego spins on a spot and then slaloms his way through the England team beating one man after another before slipping the ball into the net is worthy of winning any game. What the handball clips rarely show is the series of fouls he suffered from a largely prosaic, lumbering England defence and the full elbow in the face he receives. Somehow that was never seen as cheating.

I loved him in 1986 and the scenes when he lifted the world cup. I loved his return in 1994, the goal against Greece, the run towards the camera and then the disgrace as he failed a drugs test and was sent home. I love the grainy footage of him in Italy scoring goal after goal, outrageous chips and unnatural balance while Italian centre backs try to kick lumps out of him. I love his chaotic life after retirement, the holidays in Cuba at Fidel Castro's house, the carnage of the day out at the 2018 world cup when Argentina played Nigeria, the footage of him dancing in Naples nightclubs in the 80s and training on mudbath pitches. A flawed genius for sure, a life lived at the edge of reason also, but a life lived by a man who rose from poverty in the slums of Buenos Aries to attain genuine greatness, often almost single- handedly. He lit up the lives of millions and football and the world was richer with him in it.

When Julian Cope published his existential, football hooligan, Neolithic, time travel/ road novel One Three One he created a slew of bands to go with it. The most full realised was the brilliantly named Dayglo Maradona.

As Drew said, brilliant. I suspect I'll spend a lot of today on youtube scouring for moments of Maradona's genius. The best footballer of my life time, a man who single-handedly lifted a midtable team to major trophies. A footballing genius.

Areal great post close to the genius of Diego

.....just watched that goal against England, and that slight feint as he's near Shilton, making Shilton commit, absolutely fantastic

The moment I heard he had passed away I went to my laptop and watched the two goals against England in ‘86. One a blatant cheat and the other a beautiful dance on a crowded floor. The perfect microcosm of his career in four minutes. RIP.

Footballer of the year in Scotland in 1986, there will never be another Diego.

Footballer of the year in Scotland in 1986, there will never be another Diego.

Tanks everyone.
I saw that too CC, about George dying on the same day.
My Scottish friends have mentioned this too Taft.

I haven't been scouring t'internet for Maradonna obits, but I'd be hard pressed to find anything better than this. Fantastic piece, Adam. I completely agree with the statement "Englishmen aren't supposed to love Diego Maradona" and go one further that "Non-football fans aren't supposed to love Diego Maradona" and yet... I don't mind admitting that I fall into the latter, but when I saw the Maradonna doc was coming up on TV recently, I automatically went to record it... only to find my wife (also a non-football fan) had already set it up. A 'one of a kind' character who both represented and transcended the work that brought them to (global) attention.

When I heard the sad news that Diego had passed, I did wonder if I might see Dayglo Maradonna make an appearance here. You didn't disappoint. A highlight in both Julian Cope and Andrew Weatherall's already incredible catalogue. Another excellent Bagging Area post and selection, thank you.