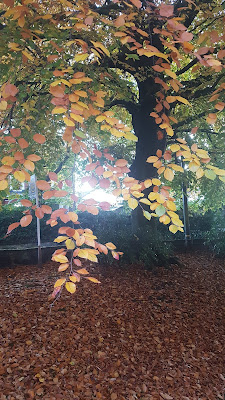 It's now November and it all looks pretty grim doesn't it? The tiered approach hasn't worked, we're in a new lockdown starting on Thursday. SAGE advised the government to do this weeks ago but they didn't. I guess Michael Gove was articulating government policy when he said during the Brexit campaign 'the British public has had quite enough of experts'. What he meant was government would ignore the advice of experts.

We go back to school tomorrow, 1300 people crammed into a building together, 30 people in classrooms together breathing the same air, with an age group who can be highly contagious but asymptomatic, and therefore can be passing it on without realising they even have the virus. If you think about it too much, it's really scary. If you don't think about it, you become complacent. Something like a third of all transmissions are being traced from education, a figure that rises with the older teenage groups. A lockdown while keeping schools and colleges open will not be enough as far as I can see. We are being led by the worst people at the worst time.

Mogwai have a new song out ahead of an album next year, an instrumental called Dry Fantasy, which suggests they've tapped into what's going on while also listening to 80s cosmische music, such as Michael Rother.

This song was the last one on their soundtrack to the film Kin from 2018, a blistering but optimistic piece of modern guitar music, walls of sound and FX and some distant, sunken vocals that start off with the line  'holding back the fear again'.

We have a one issue government who were always going to be completely unsuited to handling something like a pandemic. As you very correctly say, we are being led by the worst people at the worst time.  You simply cannot handle something like this as if it were a beanfeast for your rich cronies, because complicated tasks need experts. This government is an utter shambles and its arrogant ineptitude is simply staggering. Every day, just when you think they can't top the previous days stupidity, they do something worse.
Going back to work tomorrow after half term feels miserable as I get the strong impression we are just being asked to be childminders to keep the CBI happy. I can see this all lasting a depressingly and dangerously long time.
Thank goodness for blogs like this, a little bit of pleasure in a dark time.
Oh and havent Mogwai got more and more capable at this sort of stuff over the years...

If it's not starving children, blaming local mayors for spreading the virus (when all they're doing is standing up for their citizens) or creating a simplified three level restriction that varies from town to town, this government can be relied upon to act late and half hearted, which would be awful in normal times, but in the midst of a pandemic, they are literally costing lives. Burnham was quick to chime in on Sunak's furlough extension, and he was spot on. They put Manchester through the mill, when all they wanted was a fair deal, blanked the Welsh government on the complexities of the scheme ending midway through their two week fire break, yet still rowed back on all this (and given the timing, probably accounted for a lot of redundancies that could possibly have been avoided). You would think that admist all this, in any normal country, the chance of a Tory government being re-elected would be laughable, but who knows anymore?

Thanks Nick, glad the blogs can do some kind even if its just escapism. Mogwai have got better and better over time and their recent work is especially good. Not many bands are making their best work two decades plus after their debut.

AS for everything else you both say- I agree completely.
Closing schools seems to be politically unacceptable and I get why but there neds to be a grown up discussion about it because secondary schools will be breeding this for months. I think we will need some partial closures/ year group rotas at the least but once again this won't happen until its 2 or 3 weeks later than it should have been.

Re schools, the 6th form college I work at (as Head of Learning Support) has taken the blended learning approach since going back after the summer. Half of each class is in lessons one week and then the other half the next. Whoever isn't present accesses lessons via Teams. I still have real concerns though and these are only increasing the more time goes on.