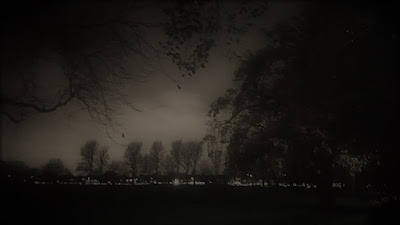 The Wolfgang Press were a post- punk band with industrial tendencies on 4AD who turned to face acid house in the late 80s and early 90s and made some avant- dance records up to 1995 when they abruptly stopped. They were labelled goth by the music press at times, a charge they always denied but there's no doubt that there's a gloomy element to their music. Unsurprisingly they benefitted from being remixed in the 90s, their sound lending itself to be being chopped up and rejigged by the likes of Adrian Sherwood, Barry Adamson, Jah Wobble, Apollo 440 and Sabres Of Paradise. I posted a song by them back in 2013, Ecstacy (released in 1985), but nothing since and bizarrely for this blog I've never posted either of the Sabres remixes.

The Sabres remixes are both from 1994, that stage were Weatherall, Kooner and Burns were making really stoned sounding music, remixes that reek of clouds of marijuana smoke, hip hop drum loops, lots of echo and a guitar line or synth/ organ part winding it's way over the top. Head nodding stuff.

The Jah Wobble remix of Chains is a different kind of fish completely, a very bright and spacey affair, BJ Cole's pedal steel guitar locating it way out west with the long whale sound noises and shimmering sound effects sounding like they're being beamed coming in from 50s science fiction film. A 90s breakbeat and sections of Michael Allen's growly vocals being dropped in, and Wobble's bass occasionally surfacing,  make for a something very enjoyable, not unlike listening to several radio stations all playing at the same time but weirdly in sync.

Have you read "Facing The Other Way" Martin Aston's very thorough biog of 4AD? It's a fascinating read, going through post-punk through to the dance years in sometimes forensic detail. I think you might enjoy it.
Good tracks btw...

Thanks for the recommendation Nick, I should read it, it's been on my mental book list for a while.

I am a huge fan of Wolfgang Press. Always felt they were from the "thinking man's" end of the Post-Punk spectrum. They certainly had a way with a rhythms, dance or otherwise.
The Sabres mixes of 11 years are like swirls of smoke in an already smoky room - sometimes the music is above you, sometimes you are moving right through it. Wobbles mix of Chains is like an extension of WP's sound, mixer and band on a similar path. MIchael Brook's remix of Going South is one of my favorites from the Funky Little Demons Era. Barry Adamson's remake/remodel of Executioner from that album is urban and urgent. The Spanish guitar sound at the opening is tinged with regret before the song delves into its litany of crimes.

I was lucky enough to see The Wolfgang Press supporting Pixies circa 1989/90 and have been a big fan since, though I find myself coming back time and again to Funky Little Demons. The remixes with the limited edition 2x CD are all awesome, and the Sabres Main Mix 1 is no exception. It was a while later before I got the 12" of Going South with the Sabres Main Mix 2 of 11 Years, but it's impossible for me to decide which of the two I like better.

I'm a big fan of Wolfgang Press, I can see why they got labelled Goth. I think they have a modern gothic element to their sound and image. I particularly like Bird Wood Cage & Queer albums and their cover of Mamma Told Me Not To Come.