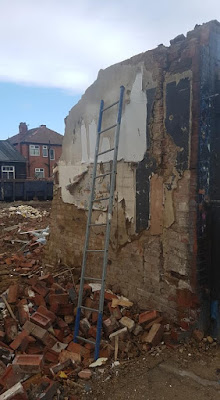 It's funny how things can get missed and then turn up years later. I had no idea this existed and only became aware of it via a social media group where no one else had any idea it existed either. Back in 2008 one song on an album by a psychedelic indie band from Los Angeles called The Little Ones was mixed by Andrew Weatherall. They were on Heavenly at the time. Weatherall had a long running relationship with the label built upon his friendship with label boss Jeff Barratt dating back to the late 80s, a link which led to Loaded and then everything else. The very first record Heavenly ever released was a Weatherall remix (Sly And Lovechild's The World According To... Weatherall, posted previously several times). Farm Song is slow paced, day glo, 60s inspired psychedelic pop, all harmonies and tambourines, guitar solos and swirling sound. It's available at Bandcamp on the album Morning Tide.

From the same time frame, 2009 in fact, and also on Heavenly but sounding very different, Wilmslow's kings of widescreen melancholia Doves were remixed by Andrew, a chunky, loud affair, heavy bass line in the foreground, plenty of dub space and FX and an early sighting of the chuggy ALFOS sound.

Heavenly threw a few of these sort of bands against the wall around that time...The Loose Salute (my favs, ex Slowdive/Mojave 3 with a Californian vibe) and Soft Pack were two others. I dont know why they didnt become more well known, maybe it was just wrong time wrong place, but they all deserved more.

This was one of those bands I highlighted during that short hype machine series I did earlier this year. All I have by the Little Ones is the Sing Song EP from 2006, and I have to say their sound changed quite a bit between then and this song on Bandcamp from 2008... simple and lo-fi to 60s-inspired and psychedelic.

Now I know why the name was vaguely familiar Brian.

I was recently commenting that there is still so much Weatherall-related music out there that I've yet to discover and you've gone and done it again. Another Bandcamp purchase and money well spent.

I got the Doves remix back in 2009 from the RCRD LBL website (remember that?), along with Sasha and Prins Thomas remixes of songs from Kingdom Of Rust. All excellent, but again Andrew Weatherall delivered the goods and then some.