You Say What Is This? 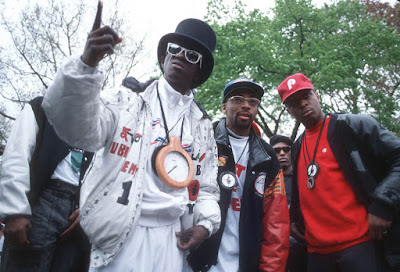 Yet another thirty year old record for your ears, this one first released in June 1989, almost thirty years to the day- Public Enemy's Fight The Power. The first line of Chuck D's explosive vocal states the year, as if you had any doubt, '1989, the number, another summer, sound of the funky drummer'. Before that though there is a sample from a speech by civil rights activist Thomas Todd describing African American men and their attitude towards the war in Vietnam- 'Yet our best trained, best educated, best equipped, best prepared troops refuse to fight. Matter of fact, it's safe to say that they would rather switch than fight".

From there The Bomb Squad take over, bringing the rhythm and the noise, riding in on several James Brown samples- loops layered over loops layered over loops- plus parts borrowed from the lineage of black American music including Sly Stone, The J.B.s, Bobby Byrd, The Dramatics, The Isley Brothers, Rick James, Afrika Bambaataa, Trouble Funk and Kurtis Blow, plus Bob Marley, and for good measure sampling themselves. It's a production tour de force, both furious and made to be danced to, seething with anger and righteousness but funky as you like. Chuck D's voice is an instrument in itself, the tone and timbre of his voice and the rhythm and flow of the words, with Flav cutting in. The only 'live' instrument is Branford Marsalis' saxophone, further cut up and dropped in by Hank Shocklee. It's a 1989 peak, a Public Enemy peak, an anyone ever peak.

Chuck's lyrics for the third verse are are among his best and most provocative. The group always said that the song was about fighting the abuse of power. In the third verse he takes it to another level, aiming squarely at white America and the entire music industry, stealing from black artists to sell white performers to white consumers- 'Elvis' he rasps, his vocal chords igniting, 'was a hero to most but he never meant shit to me, straight up racist that sucker was simple and plain', 'yeah' comes in Flavor Flav, 'motherfuck him and John Wayne'. Chuck D later said he wasn't attacking Elvis personally but that Elvis represented the theft of black music, the lack of acknowledgement that there was black music before Elvis. John Wayne's racist views, on the other hand, were widely known. It's a powerful, incendiary line and followed by one almost as good 'cause I'm black and I'm ready and hyped plus I'm amped, most of my heroes don't appear on no stamps'.

Fight The Power's release in 1989 came with the film Do The Right Thing, Spike Lee's exploration of racial tensions in the summer in Brooklyn, simmering disputes between Italian Americans and African Americans and Korean Americans, white cops and black residents and ends with an explosion of violence by the end of day and the film, partly caused by a pair of scuffed Nikes. The film opens with Rosie Perez dancing to the song. Radio Raheem  blasts it out throughout the film from his boombox. Spike Lee commissioned Pubic Enemy to write the song, something 'defiant... angry... rhythmic' It's fair to say they delivered.

There are two versions of the song- this one, the soundtrack version, worth posting it with the video which is a definitive and dramatic piece of work in itself, filmed in Brooklyn.

The following year a slightly shorter version of Fight The Power closed Public Enemy's album Fear Of A Black Planet, the third of their three classic lps.

Fight The Power
Posted by Swiss Adam at 08:00

A full 15 years before Public Enemy...

Spike at his best. You can really feel the heat and the boiling tempers.