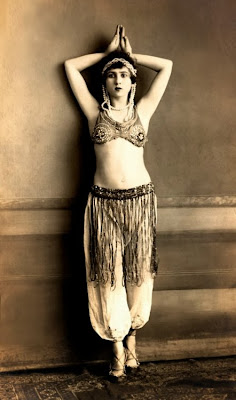 I found this on the web recently, a fabulous dancey remix from Turkey- so I have posted it accompanied by a picture of Broadway dancer Janet McGrew dressed as a belly dancer, which is probably an awful piece of cultural stereotyping. It's by Urfali Bapi and remixed by Baris K (who may well feature here again very soon due to an imminent, tripped out remix by Andrew Weatherall/Asphodells). I don't what you call this stuff- globaldelic was a suggestion at the site I first heard it. I've never been a fan of the label 'World Music'. I just know that it shakes and shimmies and sounds great.