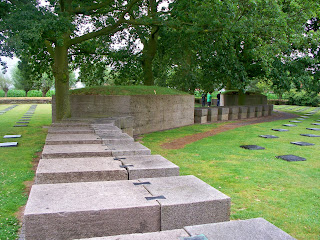 I should have posted this yesterday I suppose, with it being Remembrance Sunday but I thought I'd wait for the 11th, it being the day the armistice was signed that ended the First World War. In the summer of 2009 I took a trip to Ypres, Belgium- the scene of some of the worst fighting of the war. These are just a handful of some of the pictures I took. It was a profoundly moving experience, the row upon row of grave, many of unknown soldiers. Around Ypres were names I have been familiar with for years- Hellfire Corner, Passchendale, Essex Farm, Tyne Cot. The picture above shows Langemarck, a German cemetery, last resting place of 18, 000 German soldiers and two British. The plaque below records the names the names of four German young men and twenty unknown Germans. 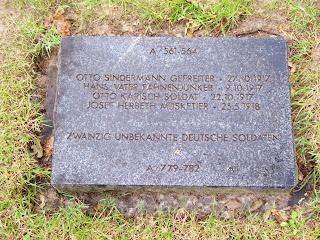 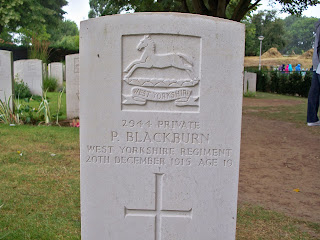 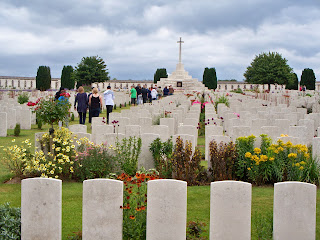 Tyne Cot is the largest British and Commonwealth War Graves Cemetery in the world. When we visited an Australian male voice choir were there. As we walked past the ANZAC part of the cemetery the choir was singing Abide With Me. An 'excuse me, I've got something in my eye' moment. 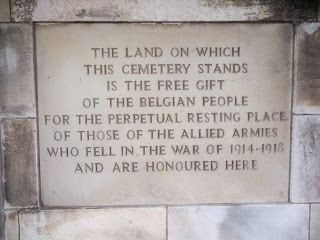 On the western edge of Ypres is the Menin Gate, a memorial to 37, 000 British and Commonwealth soldiers whose bodies were never found. As well as the list-upon-list of typically British names were short lists of names of men from Jamaica and India, Singhs in amongst the Taylors and the Walkers. 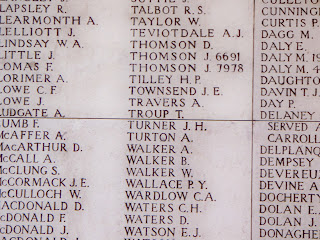 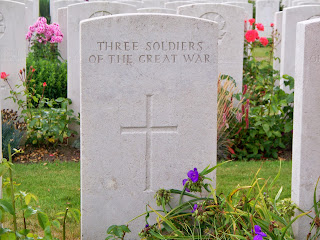 Tyne Cot looks down towards Ypres from the higher ground around the village of Passchendaele. In 1917 the British army attacked up the hill, through the worst rain in memory and the resulting mud. In the middle of the cemetery are three concrete machine gun posts, permanent reminders of why the cemetery is full. On a nice Flanders day it was still fairly easy to picture the struggle the men had- while also being beyond comprehension. 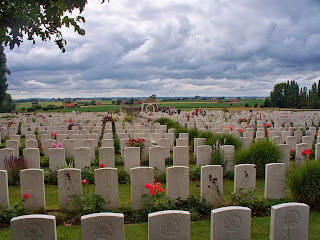 Everyone should go at least once- the cemeteries, the landscape, the surviving trench systems, the remains of bunkers and first aid stations, the museum in Ypres town centre, the war memorabilia still churned up by Belgian farmers and sold in Ypres' shops, are all unforgettable.

And the row upon row of the graves of men, sent abroad to fight 'the war to end all wars', should remind us why we should never forget.

Do you find that your students are very keen to observe the silence?

They have been today- and last year too I think. More than they used to be definitely. Maybe the centenary message and increased coverage is having an impact.

Thanks for the post SA.
I may have mentioned it before, but I have sold poppies for the past 4-5 years and the support is deffo getting bigger and stronger. I often have a queue of folk happy to wait for their poppy. (I do also talk a bit of bollix to them ... obvs!)

A place for heroes in their own different ways.

Glad you've shared this one.