The Return Of Friday Night Is Rockabilly Night 127 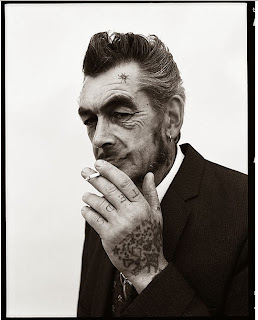 Halfway through Movember, it's rockabilly moustache time on Friday night. It's 1957 and Warren Smith's worried. He's been out of town and his girl's on his mind...

'Who you been lovin' since I've been gone?
A long tall man with a red coat on

Who's been playin' around with you?
A real cool cat with eyes of blue

As far as Warren's concerned despite all the trimmings the new man has- the red Cadillac, the red coat, the eyes of blue, his height, the full wallet- the real deal sealer for his ex appears to have been the black moustache. All the single gentlemen, you know what to do.

Red Cadillac And A Black Moustache
Posted by Swiss Adam at 16:30