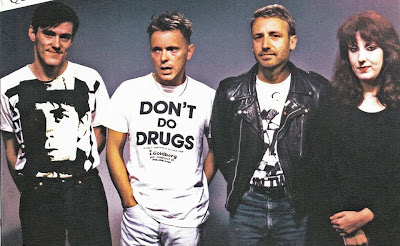 This is not a New Order post- Stephen's t-shirt is the only link. Bernard looks like someone's pissed him off though (or he's suffering from gastric after-effects of that curry at lunchtime).

I've been listening to some Lou Reed recently- yes, because he died. I played New York all the way through, an album I don't think I've listened to in twenty years. I was surprised by how much of it was familiar which shows how much i must have listened to it in 1988-9. I saw him when he played London in the summer of '89, at Wembley Arena I think. The university year had just finished and I went straight down to stay with my friend Mr AN of Ealing and we trooped off to see Lou. He was good (which is surprising as I get the feeling he was pretty hit and miss live depending on his mood and level of contempt for the audience). He played New York in the first half and then some greatest hits in the second- I don't remember which greatest hits other than Sweet Jane and Rock And Roll, and he played them as they should be played rather than the butchered versions I've seen on TV at times. At one point he muttered something about all the sounds being played by 'real musicians no synthesisers or samplers' which narked me a bit because I was quite into both as you might have gathered by now, but other than that, a good gig and night out.

I found my cd re-issue of Transformer as well recently, an album I also know inside out but haven't listened to for ages. Bowie and Mick Ronson's work on it is superb and the songs sound great, in terms of arrangements and production. The lyrics are top stuff too, putting that gay, 70s New York vibe right out in front. Tacked on the end of the cd are two extras. This is the demo of Perfect Day, just Lou and acoustic guitar, slightly different lyrics and phrasing but interesting to hear. After a few seconds silence there is then a radio advert forTransformer. Worth a d/l I think. And miles better than that BBC ad which got irritating quite quickly.