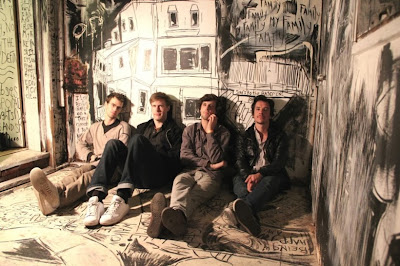 The new single from New York's Zula, called And More Business, is worth a few minutes of your time if you like a bit of psychedelic. The band take some cues from the edgier end of Manchester circa 1990 and the widescreen productions of dance records from the same time, Weatherall remixes that kind of thing- dancey, left field, groovy pop. The band have had some decent press recently with a review at Spin (where you can also stream the new album) and a mention in the New York Times following live shows at the CMJ. There's some real thought and time spent on the sonic aspects of their songs- breakbeats, delay pedals, general sense of space- and the wispy vocals cut across them nicely. The band would like to add that they are inspired by 'repetition and the transporting and revelatory experience of psychedelic, hypnotic space' and I can't put it any better myself.

There now follow a load of links- The Twin Loss e.p. is at Bandcamp. The forthcoming album This Hopeful can be pre-ordered on vinyl at Inflated Records. Their website is also worth popping in on if you want a further look at what Zula have been doing.
Posted by Swiss Adam at 08:00