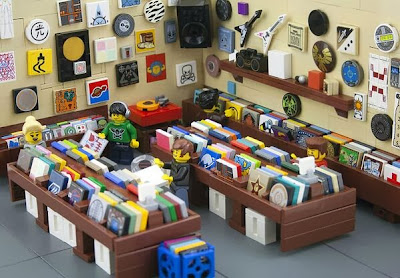 I like this picture of a Lego record shop, not that it's related to the rest of the post.

Someone asked me recently what I thought of The National and then got a bit huffy when I said 'yeah, they're alright'. 'What do you mean, alright, don't you like them?' he said. 'Yes, they're alright' I replied (that's a good alright, not a 'weeell, they're alright I suppose'- can you see the difference? I could. He didn't). They are alright- I quite like some of their stuff, not so fussed about a full album, some good songs that bear repeated listening (Apartment Story is stunning). And this one, I really like- it's more than alright.

I met Drew for a few beers the night before last. He was in town for work so we met in Didsbury's Old Cock and we talked about the things middle aged bloggers talk about- life and families; car troubles; The Clash, Joe Strummer and Mick Jones; that forthcoming Mary Chain box set; various Weatherall remixes; our favourite albums of this year so far (me- Asphodells, him- Daniel Avery); the Mercury Prize (yawn); how since turning 40 the lives of people around us have turned to shit; loss and illness; scooters and cycling, giving up smoking....

So, Drew (and L, Max and Leo), Tony (DVD), Davy, David (and the girls), Jacque and John, Harvey and Sam, Rachael and anyone else I've missed who's been through the mill recently one way or another, this song- a valedictory tale of a middle aged man looking back at his youth when he used to be 'carried in the arms of cheerleaders' and raging against the dying of the light- is for us, for all of us.

Lovely piece, in best middle aged blogger fashion seems to be about nothing in particular and yet everything all at once. *salutes*

God I could do with an evening down the pub talking beer talk. Would make me want to smoke cigs though.

"....how since turning 40 the lives of people around us have turned to shit; loss and illness; scooters and cycling, giving up smoking...."

" Yep, I know that feeling"

It was a good evening.

I feel the same about Midlake and get the same reaction.

Lovely piece of writing Adam. Think most people of a certain age can relate to this.

I was never carried in the arms of cheerleaders, but thanks all the same x

Thanks to all who said nice things- means a lot.

Davy- you should try it. Just find yourself some cheerleaders and get them to carry you. You'll never see the world the same again.

Bless you our Adam (and Drew). Bollix and Boddingtons.
To know you're thinking of me is a great lift.
The feeling is mutual .. and I know you aint living the bowl o cherries version of life's sweet mystery either.

And it's not REALLY called The Old Cock ... is it?

Yes, it is really called the Old Cock. Ye Old Cock in fact. The IPA's good. Drew was on the cider.

That track's alright by the way.

It is actually really good.