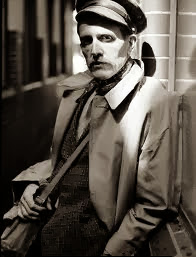 One of my favourite Billy Childish songs today. In 2005 Billy produced yet another album, this time sidestepping the three chord garage-punk to make an album of two halves. Most of the album is poetry readings, many of them nakedly honest, some funny, some quite uncomfortable to listen to. The first seven songs are something else entirely. Recording with Wolf and Nurse Julie as The Chatham Singers, they strip it right back and play seven songs of ragged Delta blues, Billy coaxing some lovely warm guitar tones and Wolf and Julie keeping time on bass and drums. If they sound like they were recorded in his kitchen, it's probably because they were. This one is particularly good.

The Man With the Gallows Eyes
Posted by Swiss Adam at 08:00

Almost as reliable as The Fall is Billy Childish. Good song.