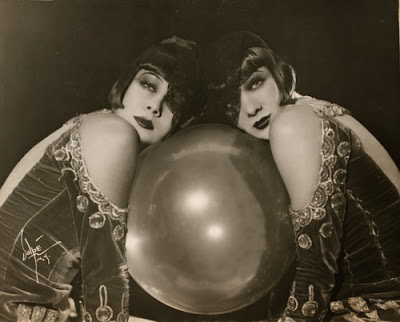 I don't know what this pair of beauties from the 1920s are doing but I kind of like it. Arty photo shoots with whatever props happened to be found in the room are clearly not a late 20th century invention.

Mrs Swiss is off on a hen do this weekend, in Leeds ('2 Es and LSD' the Leeds clubbing t-shirts used to read, back in the early 90s). So I'm on my own with the kids, trawling the record shops and idling watching people go by from cafe windows, trying to occupy two children with very different ideas about what we should be doing.

There's snow forecast for the north before the end of November. It's a bit early to be mentioning snow. This is my favourite tune by A Man Called Adam, the sound of Saturdays, terrace bars and sunshine.

According to Twitter there's a record fair on today at Sacha's Hotel, Tib St. Piccadilly. 40 tables; the kids'll *love* it.

It'll take some arm twisting. Sweets may be involved. Possibly even McDonalds.