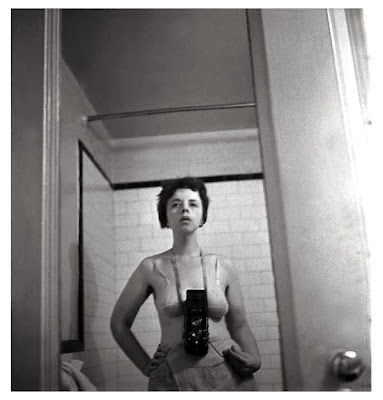 This picture shows an early version of the selfie in the bathroom mirror, 1940s style. People don't change much- only the technology they use.

There are a lot of reggae cover versions of Clash songs once you start looking for them. I suppose this shows that their reggae songs (rather than their reggae covers) had a good deal of genuine reggae groove and spirit about them. This one, a cover of One More Time from Sandinista, combines some quality dub production with a digital/dancehall riddim and a real on-the-money vocal. Not too far from the kind of modern-but-70s roots reggae inspired stuff that Prince Fatty puts out. It's by Citizen Sound (featuring Prince Blanco and Ammoye), a Toronto based dj, producer and radio show host. Suddenly there are obscure Canadians popping up all over the place (see yesterday's rockabilly post).

My half term week off has been dominated by DIY, a new kitchen to be exact. I never want to do anything like this again. It has worn me out. I have been to four different south Manchester B & Q branches since Monday, a total of eleven times, returning taps that didn't work or were dented, a sink that was fitted and then had the wrong clips to hold it in place, and getting various bits and bobs we suddenly needed but didn't have. As well as this we got a new worktop got jammed in between the walls which then cracked, leaving my father-in-law and myself spending the best part of an hour trying to maneuver it either in or out, anything just to move it. A hole for a sink in the same worktop was cut the wrong size leaving gaps around the edge, waste pipes didn't fit together, and a hob and oven were not delivered- and still haven't been. We have part two yet to come- tiling and more besides. I should add it is looking good now and a vast improvement on what we had before. I should also point out that my DIY skills are very rudimentary- I was the gopher, occasionally allowed to use a screwdriver or a saw (once). But I ain't doing it again once this job is finished. From this point on my preference for DIY is strictly punk and acid house related.
Posted by Swiss Adam at 08:00

I can understand you Adam. There are things I don't want to do and one of them is DIY. It rattles my nerves when I only think of it. And any kind of DIY includes trouble on non fitting elements or something else. Oh lord let me never DIY again.
Cheers and a nice weekend
Walter

sounds a nightmare. i'd have never attempted such a thing.

Left to my own devices nor would I.

May a person always be left to their own devices, Amen.

We started our new kitchen 6 weeks ago. A whole list of delays means were still without a sink, a cooker & washing machine. We had to go & stay at my partner mum's (5 of us) & after 5 weeks we had to move back home even with no kitchen for the safety & sanity of all involved