The Return Of Friday Night Is Rockabilly Night 128 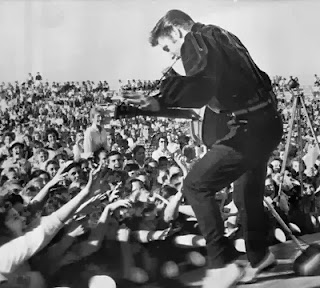 I'm stretching the definition of rockabilly beyond reason here but there is a rationale and I couldn't let the Kennedy connection pass by.

I have a memory of watching something back in 87-88 (ish), probably The Chart Show's indie section but it could have been something on Channel 4, and it was of a band called The Jack Rubies (named after the man who shot Lee Harvey Oswald, who may or may not have shot JFK). The song had an 80s rockabilly swing with a video containing black and white footage of  Elvis performing outdoors in the 50s, like in the picture above. My memory tells me the song went 'the King is dead...'

My not very extensive research has turned up The Jack Rubies on Youtube- not particularly rockabilly to be honest, more mid-to-late 80s indie-pop, in a similar vein to The Mighty Lemon Drops, that sort of thing. From Stoke Newington. Brief music press interest. Underperformed. Had a college radio hit in the US. Obscurity.

This song, Wrecker Of Engines, has some slight rockabilly influences. Possibly.

I remember the name, but nothing else about them. S'alright. Bit of a Marr-guitar influence in there I'd say.

The Mighty Lemon Drops! Ha! You'll be on about The Milltown Brothers next.

I think I may have a Milltown Brothers record.

Strewth! 50 yrs eh.
If the bullet dint get him, the infidelity woulda. *Severed Penis Found On Grassy Knoll. Woman in Pink with cleaver arrested".

Got any Rockabobby Big Bollocks & The Churlish?

Next week DVD, next week.