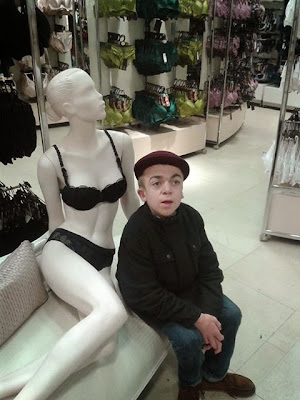 Our son Isaac is 15 years old today. Born at break of day in 1998, with a genetic disease we knew nothing about and had never heard of (Hurlers Disease, MPS 1), he has had a life punctuated by hospital, illness and medical appointments. He also lives his life to the full. He goes to a special needs secondary school which he loves, wears a hearing aid and a cochlear implant (which has changed his life in the last two years), and as the picture shows he enjoys the ladies underwear departments of major retail outlets. He joins two young people with special needs groups for activities and a social life with peers locally- services which the Tory bastards at Trafford Council are trying to cut by over 50%, allegedly in the name of 'personalisation'. I think we may end up seeing them in court. Given that he has been within minutes of death several times in his early life, and survived both meningitis and a minor stroke in 2008, I sometimes think it's a miracle he's made it to 15. Not that I believe in miracles, not your religious type of miracle anyway. And on he goes, defeating and confounding expectations along the way. Happy birthday Isaac.

This is Mr Richard Hawley, live on BBC 6 Music.

Booby shop!
Happy birthday Isaac, from all of us

Many more happy lingeries to you Isaac

Have a great birthday Isaac and long may your lum reek as we say up here..

it is nice to know that with all the storms life throws at us there is always a ladies underwear department nearby ,therapy I like to call it.
wishing Isaac a very happy birthday and all the best to you in your fight for what is right.
cheers David

All the very best from my side as well, Isaac: cheers, little big man!

Indeed. Happy birthday doesn't do justice to it.
A million hugs.
A small nod to the parents too!

Love, light and strength to you all.

echo all of the above, happy Isaac day, hope he's had a top one.
ini

Thanks for everyone's best wishes and comments. We've been out shopping (heh heh) and for tea.

Best wishes to Isaac from me and mine, glad to hear he had a good one.

Sorry to be late. MHRs to Isaac and hugs to you all. Did you stumble over any Craggy Island priests in the lingerie department?

Sorry to be late too. All the best regards to you Isaac. May the fortune be with you and many birthdays to celebrate.
Cheers, Walter

Another late one: happy birthday to the man. Hope it was a good one!