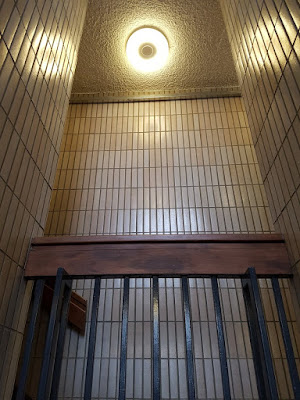 This long song- if song is the right word (and I don't think it is)- comes from the supernaturally talented Richard D. James. In 1994 Aphex Twin released Selected Ambient Works II, a long album of lengthy compositions of largely beatless, textured, meditative ambience. The various tunes, almost all analogue recordings rather than digital, shimmer and echo, invoking melancholy and reflection, waves and loops of sound. Much of it is gorgeous. RDJ said the tracks were about a 'weird presence... electricity... totally dreamlike'. Most of them were numbered (#1, #2 etc) but have since then been named by fans after the thumbnail photos that accompanied each one. This one, on the vinyl edition Side 5 Track 2 or #19, has become known as Stone In Focus. One Youtube commenter opines that this is not so much music, more the notes that the universe makes- 'Listening to this, I always think that if the universe could make a noise - this would be it.... A slow, creaking, cosmic wave of audio bliss - never ending, whilst every celestial object moves on it's path through eternity'. I know what he means.

Stone In Focus was only released digitally for the first time fairly recently (last year I think) having been left off the CD releases. If you want to buy it- and you should- you can do so at Warp.
Posted by Swiss Adam at 08:00

I usually try to check out the various Long Song contributions first thing on a Monday Morning, but for various reasons was unable to today. Consequently I'm listening to 'Stone in Focus' late in the evening with a glass of wine in my hand - and it's hitting the spot magnificently.

Never got a chance to check out the blogs yesterday. This is sounding so good on a Tuesday morning apart from the worsening tinnitus following last night's Death Valley Girls gig