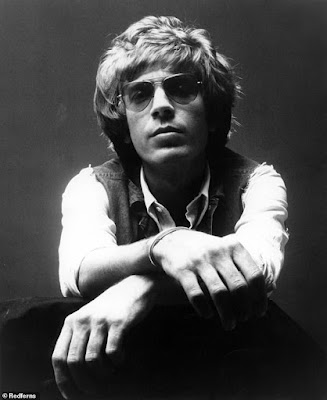 It seems like it's becoming a weekly occurrence, losing a major star of experimental and groundbreaking pop music. Scott Walker died yesterday aged 76, a man whose career took in more than most, from orchestral 60s tearjerkers to the songs of Jacques Brel, from 70s electronica to recording the sound of a piece of meat being hit repeatedly, and in there, central to the story, four numbered solo albums that redefined what a solo artist could do. RIP Scott Walker- one of those people who we shall not see the like of again.

Here are three Scott songs I've loved, all posted before but not for many years. Firstly, from The Walker Brothers 1975 re-union, a tremendous cabaret song, all self-pity and swelling string sections and that voice. There was a period twenty-odd years ago when I used to got to a pub quiz with a friend and two older blokes, both the age then that I am now. We joined forces to win the quiz one week and then stuck together. One of the older pair was a builder. He'd pick us up in his van and we'd drive to the quiz all singing along to No Regrets, a Best Of The Walker Brothers being the only tape in the van, No Regrets always getting the rewind.

This one, a B-side from 1966, is a small hours classic, a bassline, strings and a ton of reverb on the vocals. A man haunted in the verses and then tormented but alive when the chord change into the chorus hits home. 'Someone called for you, but I hung up the phone, what could I say?'

After The Lights Go Out

This one, from 1978's album of the same name, is a total curveball, funky and disco influenced with a bit of Bowie's Low in there too- a complete commercial failure.

I know that it is not the norm but I love the poppier Scott Walker, No Regrets, Any Day Now and Duchess

What a crappy few weeks it's been. Rest easy Scott.

Like all the singers your parents liked in the 60's and 70's. Matt Monroe, Andy Williams, Tony Bennett and Frank, Scott had the tonsils but he really wanted to sing about his next case of gonorrhoea ('Next'), the humdrum grind of the 9-5 life ('The amorous Humphrey Plug'), playing chess with Death ('The seventh seal') or a masochistic relationship seen through the eyes of the tortured, my favourite, 'The Electrician'. In the 90's he really went out there channelling Ligeti, Stockhausen, early Swans and Throbbing Gristle producing I think his two masterpieces (if you like that sort of thing?), 'Tilt' and 'The Drift'. I couldn't always stay the distance of his ambitious soundscapes, but you've got to love his audacity and his vision. thank you Scott.
- S.R.C