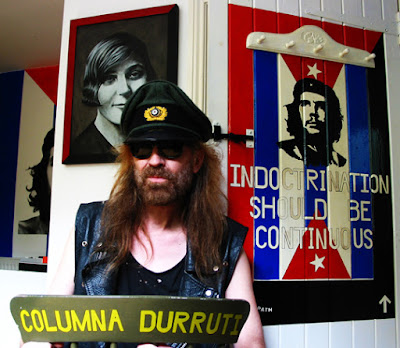 The best Julian Cope album of this decade is 2013's Revolutionary Suicide, a double disc tome taking in acoustic guitars, mellotrons, Julian's falsetto, one of his career best songs (They Were All On Hard Drugs, an alternative look at human history), several pops at organised religion and at least five songs that could qualify for a Monday long song. This one is the longest, over fifteen minutes, a protest song on acoustic guitar with a military drum. The Armenian Genocide is about the forced march and subsequent murder of 1.5 million Armenians by the Ottoman Empire in 1915, under the cover of the First World War. Cope aims the song at modern day Turkish governments and their refusal  to recognise the deaths as genocide.

The Armenian Genocide
Posted by Swiss Adam at 08:00

Blimey, this is great. I don't really know much about Julian's more recent musical escapades. Based on this tune, I should be paying more attention.

This is a work of genius...