Sometimes I See You In The Water 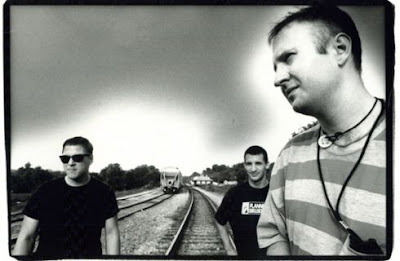 Back to Bob Mould to end the week. In 1992 Bob formed Sugar with Dave Barbe and Malcolm Travis. His first two solo albums- Workbook and Black Sheets Of Rain- hadn't sold well and Virgin let him go. Back in a trio and released from his record contract Bob found a rich vein of form, working out of R.E.M.'s rehearsal room in Athens, Georgia and within the year Sugar played live, recorded two albums and signed to Creation in the UK (then on the crest of a post-Screamadelica, Bandwagonesque and Loveless wave). The first album, Copper Blue, came out and was an immediate hit, album of the year in the NME and spawned several singles.

Copper Blue doesn't have a weak moment, showcasing ten first rate Bob Mould songs. The production is fuller than it was with Husker Du, the drums and bass bigger and chuggier. The guitars fill up more space, crunchy and melodic. In the wake of Nirvana's success there was a crowd ready for more punk with choruses and suddenly Sugar found an audience. A year earlier Bob couldn't get arrested. The second song- A Good Idea- is a tale of two lovers down by the river, on a warm summer night where 'the air is thick with the smell of temptation'. They go in to the water at his suggestion- 'why don't we lay in the water? Let the water run over me...' he says and she replies 'that's a good idea'.  Inevitable tragedy ensues, she submerged beneath the surface, temptation turning to death by drowning.

'Copper Blue' is a tremendous album, mMy favourite of those post-Husker Du years is probably 'Workbook' though.

I find Workbook an album I admire rather than love. Need to pull it out and play again possibly.