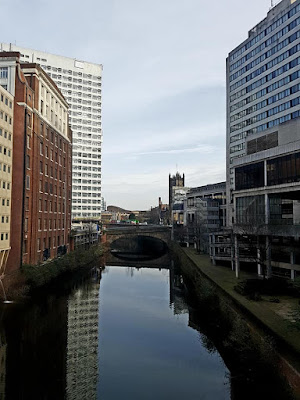 After watching the footage of the Durutti Column playing in Finland in 1981 that I posted last week I went back to a couple of their albums. I'd read an interview with Stephen Street somewhere where he mentioned producing Durutti's 1989 album (titled Vini Reilly) and I'd read a review of the triple CD re-issue of 1990's Obey the Time album so there was a lot of Vini/Durutti in the ether. Plus I had another recently taken shot of the River Irwell taken from the same bridge but looking north to go with the one I'd used with the Finland post.

Stephen Street producing Vini Reilly was a consequence of him producing and co-writing much of Morrissey's Viva Hate and then getting Vini to play guitar over much of it. Vini had a strop part way through the recording and claimed to have written all/most of Viva Hate which he apologised to Street for (but Morrissey uncharacteristically got the hump- if I remember correctly he removed Vini's name completely from the re-issued versions of Viva Hate). But anyway, I'm not here to discuss Morrissey. Vini Reilly (the album) has one of Durutti Column's most beautiful moments, one of Factory's greatest releases, the song Otis, where Vini's guitar and and his friend Pol's voice combine with an Otis Redding sample to create an absolute masterpiece. Nothing else quite reaches those heights and the album takes in an array of styles from opera to Spanish guitar.

The following year's release Obey The Time is a much more complete album, Vini recording with the Hacienda/acid house/Madchester explosion going on all around him and inspired by house music and inspired to use samplers and keyboards. In experimenting with the new technologies and sounds Vini was obeying the time. Usual drummer and Durutti partner Bruce Mitchell only appears on song on Obey The Time. The single that came with the album, where Together (of Hardcore Uproar fame) remixed Contra-Indications as the Together Mix is another DC peak but the one that caught my ears listneing to Obey The Time this time was the second song in, this one...

Opening with a Hacienda inspired bassline, some washes of synth and a little guitar flourish Vini takes us on a five minute after hours trip. Two songs later Home provides another for the DC top ten and Spanish Reggae is up there too (despite its admittedly unpromising title). With several highlights the album works well from start to finish, sounding more complete and followed through than '89's predecessor. Hotel Of The Lake 1990 was given its title by co-manager, friend and record label boss Tony Wilson who was on holiday in a cottage by Lake Como that summer and Vini came to him short of song titles. All of which, let's be honest, is perfect Sunday morning stuff.
Posted by Swiss Adam at 08:00