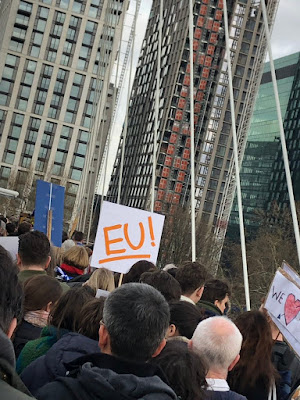 Sometimes things just come together really nicely. I had something else planned for today's long song but then Twitter throws this photo up and one thing leads to another and we have Neu! instead. Krautrock against Brexit!

I originally wrote a long post here about the ongoing Brexit disaster but then deleted it- does anyone need any more opinions right now? Then I remembered Daniel Avery's ambient/techno track from last year, a track named after the label our Prime Minster (at the time of writing) gave to nearly half the population a couple of years ago back. On Wednesday night Theresa May claimed on live TV that she's on 'our side' and that actually parliament is to blame. Nice bit of anti-democratic demagoguery there. Thankfully, in a world increasingly full of right wing demagogues and populists, our own version is a shit populist, completely lacking the common touch and with little actual popular support.