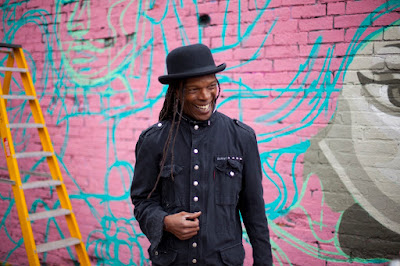 Just over four years ago The Beat led by Ranking Roger played Sale Waterside, a venue just ten minutes walk away from home. Roger led a well drilled band through a top set list of songs by The Beat, plus some new ones and a cover of Rock The Casbah. His son Ranking Junior was with him, toasting and rapping, and Roger encored with his shirt off, looking like a man in the rudest of health and with boundless energy.  How sad then to hear the news first thing yesterday morning that Roger had died aged just 56, following multiple health issues- a stroke last summer, two brain tumours and lung cancer.

The Beat were one of the bands of the post-punk and ska days and in Mirror In The Bathroom had a genuine classic single that still moves dancefloors today.  They weren't a one song band though and also had Hands Off... She's Mine, Stand Down Margaret, Too Nice To Talk To, their debut single cover of Tears Of A Clown and the wonderful Save It For Later plus three albums. As frontman/co- vocalist Roger was arguably the face of the group, a very young man suddenly thrust into Two Tone tours and Top Of The Pops, always with a grin on his face and an infectious manner. The world is a sadder place and poorer place without him.

Save It For Later (Extended Version)

After The Beat split he joined General Public with various refugees from other groups- some of The Beat, a Dexys outcast, Horace Panter from The Specials, a post- Clash Mick Jones - and although they did little in terms of sales they had some moments. This one is shimmying mid- 80s dance pop.

In recent years Roger played with Mick Jones in late period line up of Big Audio Dynamite, made solo records and fronted one version of The Beat while co-singer/guitarist Dave Wakeling fronted another. They had an agreement to tour in different parts of the world, Roger's Beat in the UK and Europe and Dave's in the US. How sad to end at such a young age. RIP Roger.
Posted by Swiss Adam at 08:00

The recent couple of Ranking Roger's Beat albums are very respectable efforts and well worth a listen. He was interviewed only a couple of months back on 6Music and gave no indication that he was so ill. Very sad news indeed. 56 really is no age at all.
I'm pleased that you singled out 'Save It For Later' for special attention, often overlooked, but one of The Beat's best in my opinion. Pete Townshend thought so too. https://unthoughtofthoughsomehow.blogspot.com/2017/01/version-city-57-pete-townshend-sings.html

You chose some excellent versions of these songs to remember Roger. So many to choose from, isn't there? Quite a legacy.