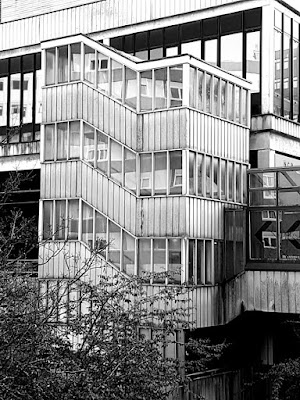 A couple of weeks ago Nina Walsh announced the release of a second album by the late Erick Legrand (following 2017's Second Machine From The Sun). The new release, a fifteen track album titled 11:11 is available at Bandcamp and well worth the £8 being asked for it.

The songs, largely instrumentals, take in a variety of styles from the dramatic rat-a-tat drumming, woodwind and horns of opener Last Tango to the twangy guitars stomp and theremin sounds of Nina Is Camping, from the jazzy, 60s thriller vines of Killing Moi, the Hawaiian guitars of Doing It to the dub techno of Mekanik to the filmic, Motorik chug of album closer Mad. It all hangs together really well, sounding like one piece of work, the soundtrack to a film that doesn't exist (to use the classic interview quote of the mid-90s electronic artist). Highly recommended.

I don't know much about Erick- the Bandcamp page for this album describes him as 'a turbulent creative force' and gives a selective timeline of his solo work, starting as head barman at the Camden Falcon between 1989 and 1991 to recording with Headcleaner and running the recording studio Bedlam in the 90s. In 2007 he produced an album for Nina Walsh (from the dates I think this must be her folky Bright Lights And Filthy Nights album) before recording solo compositions between 2009 and 2011. He claimed to be 'one of the most sacked drummers in London'. Martin Willis from Headcleaner wrote a tribute to Erick to accompany the first set of solo recordings which you can find here. Other than that I don't have much to go off but give over part of your day or this evening to 11:11 and you'll find that the music speaks for itself.

I'm liking the sound of this SA.

Right up your strasse Swede.