Running Through The Fields Of Flowers And Smoke 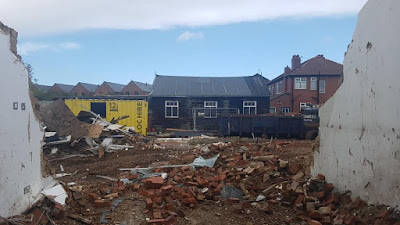 In 2018 Calexico released their latest album in 2018, an overlong record that opened with two really good songs. Since 1997 they have made nine studio albums plus various singles, E.P.s and compilations. They started out sounding very much like their name, the mariachi horns and rhythms of the Tex- Mex border with an Ameri- indie sensibility. Their second album, The Black Light, was a brilliant realisation of this sound and their third, Hot Rail in 2000, was a song rich highlight (coming round the time they put out the magnificent The Crystal Frontier as a single). After that I dipped in and out with them (more out than in, in truth) and their 2006 album Garden Ruin and Algiers from 2012 both sounded to me like they'd lost their sound and become a bit dulled.
I wouldn't have bothered with 2018's album The Thread That Keeps Us if I hadn't heard the first two singles (and the opening two songs of the album) on a music blog. Calexico, a core duo of Joey Burns and John Calvertino, brought in some extra musicians from around the globe to fill their sound out, to add some earthiness to their music and to expand the sound. They recorded it in northern California and both Burns and Calvertino said that the wild coastline brought something to the sound and to the songs. It was also a response to Trump. This song, Voices In The Fields, was a tribute to those who have had their lives uprooted by war and oppression and the need to hear songs written by other voices- ordinary voices of workers and migrants as well as the influences Burns was listening to when making the record (Joe Strummer, Mavis Staples, Bob Dylan). They were also into Tinariwen and the north African grooves can be heard in this. Specifically, Burns write the song after hearing about the postcards Syrian refugees were writing, one of the ways they were attempting to deal with the emotions that being a refugee brought.
Voices In The Fields
The album's title, The Thread That Keeps Us, was a reference to living in an age of extremes, where media and politics drive people apart, and how we should try to find the common threads that bring us together. Burns mentioned these little threads that connect people wherever their come from and whatever their circumstances- '... music, a cup of coffee... a walk in nature'. These connections are even more true now than they were two years ago as we face a Covid winter. To add to the backdrop to Voices From The Fields four migrants died in the Channel this week when their boat sank after setting off from France including a child of five and a child of eight. The UK Home Secretary Pritti Patel made a typically cold response about the dangers involved in crossing the Channel. Calexico's anger at Trump's policies and presidency was evident on The Thread That Keeps Us and its opening song End Of The World With You. News coming from across the Atlantic suggests that maybe, just maybe, next Tuesday the U.S. (and the rest of us) will be delivered from the racist, white power- enabling, narcissist currently living in the White House.
Back in the early years of this century Two Lone Swordsmen remixed Calexico, a song from their Hot Rail album. Weatherall was a fan of the band and on this remix manages to prefigure Covid while welding together Calexico's dry, dusty Tex- Mex sound with TLS's electro/ techno machine funk.
Untitled III (Virus Style Mix)
Posted by Swiss Adam at 08:00

I remember seeing one of those somewhat shamefully tucked away BBC Glastonbury coverage slots of Calexico playing in, at a guess, around 2010 or 2011, pre Algeirs anyway, and they were absolutely brilliant. A superb documentation of a road tuned and tightly honed band, clearly enjoying every second. It was easily the best of that year's coverage. As ever, this version by TLS is an interesting interpretation of a good song.
Priti Patel is just one reason why I have had to ration my daily news intake at the moment. I just don't understand how one human being can show so little empathy to others.
Maybe, just maybe if Trump loses next week, then a little bit of hope will be felt across the world. All we then hve to do in this country will be to never, ever again allow this shower of bastards and thieves anywhere near elected office ever again.

They have a christmas album coming out, featuring portuguese fadista Gisela João (it made the national news here)

Bit of a coincidence that George, they announce a new album on the day I blog about them. Must see if I can make that happen with anyone else.

Just to add to the Venn Diagram that is blogging in our corner of the blogosphere, Calexico with their buddies in Iron + Wire performed a version Bring On The Dancing Horses throughout their joint tour in 2019. It is a version imbued with that mix of Tex-Mex/West Coast/American vibes the bands do so well. https://youtu.be/Td4zmjtAgww

I didn't know that Echorich, will check it out.

Picking up on Nick L's point about how good a live act Calexico are, my education in the band largely started with the ton of gigs available to download from the Archive.org website. I probably have about a dozen, but there's at least twice that now, spanning 1998-2018. Multiple stunning versions of Crystal Frontier, Stray et al as well as covers of Alone Again Or and Love Will Tear Us Apart, though they haven't quite made it to Bring On The Dancing Horses. The quality is generally excellent.