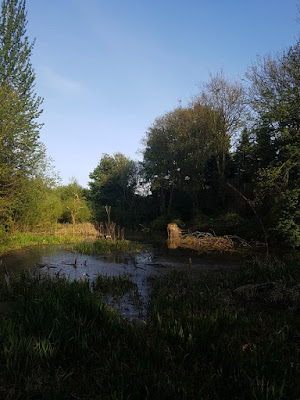 One of the albums that came out at the start of the year and was a little lost in the madness of Covid chaos in February and March was Julian Cope's Self Civil War, his 35th album apparently. Cope is so prolific that it's difficult to keep up sometimes. I bought his John Balance Enters the Underworld album, out in 2019, a five track album of instrumentals, and despite its excellence ait didn't seem to stick with me. Self Civil War is a different story,, a return to the freewheeling, psychedelic pop, time travelling Julian Cope, and an album with uptempo ballads about Einstein and Odin, songs with acoustic guitars, piano and horns, ooh ooh oohs and ba ba bas, punning titles such as You Will Be Mist and more self- explanatory ones like My Facebook, Your Laptop and Requiem For A Dead Horse. When he was touring in February, introducing songs with patter that was longer the song he was about to play and just as entertaining, Julian said everyone is engaged in a self civil war- and he speaks from experience.

You can buy Self Civil War from Head Heritage. And you probably should.

Forgotten all about this album. Need to dig out the cd

Yes this had passed me by a bit, will have to rectify that. I always prefer my Cope a bit more on the acoustic side so this album sounds a good bet.

Biased though I am towards all things Cope, this is a standout album. The sleeves notes mention "Recorded by Philippe Legènde", but the production quality is superior to many previous efforts, giving the songs room to brief and shine. Previously, I've struggled a little to recommend an album for friends wanting to sample latter day JC and pointed them to the Trip Advizer compilation, but this is the go to now. A modern classic.

Trip Advizer is a really good compilation but I think you're right Khayem, SCW may have edged it as the go to album for modern day JC.