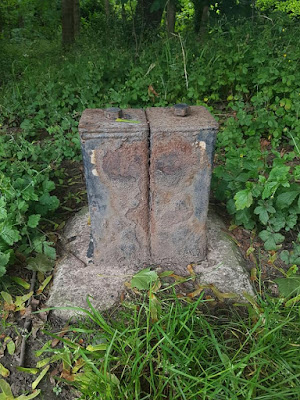 Sometimes albums from the recent past, the last year or so, are the ones that get forgotten about. One of 2019's albums that I've bene making time to go back to is Richard Fearless' Deep Rave Memory. Fearless has honed his sound in recent times, purifying everything down to a sleek, industrial blend of ambient acid techno. Death In Vegas moved in this direction in 2011 with the Trans- Love Energies album and then even moreso with 2016's Transmission, a double vinyl set of futuristic techno, Detroit via East London. His studio is a shipping container overlooking the Thames and London's Docklands area, a metal box filled with vinyl, computers and vintage gear. There's an article with pictures here. If environment and psychogeography affect the production of art- and I think they do- then this combination of shipping container, East London and the river must have played a role in the increasingly purified sound that has come out of Richard's imagination. Deep Rave Memory, the title track, is an eleven minute trip, a kick drum leading us in and and a discordant synth sound, two notes up and down, a wobbly siren sound behind it. An acidic topline comes to the fore. Four minutes in it all shifts, a siren synth refrain taking over before most of the elements drop out and then build again for an increasingly intense, sweetly melodic second half.

In 2018 Richard put out Honey, a one off single with Sasha Grey, a song I've raved about before. You can find it at Bandcamp. The year before he released Sweet Venus, a limited 12" only release that seems to be coming from the same place. Sweet Venus starts with an erratic dancing synth line and a spray can hiss of percussion before a long, ghostly, distant chord comes into play. It came out on Fearless' own label, Drone. Label name and sound perfectly aligned. It all goes off just before three minutes, the drums accelerating, the track suddenly gathering momentum, a techno bullet train.

Working backwards in 2014 there were two 12" singles, Higher Electronic States and Gamma Ray. Gamma Ray is clearly part of this, an eight minute slice of tension and release, pattering drums, metallic hiss, more looping synth notes flitting about, bouncing around a shipping container above a river.

Deep Rave Memory was one of the standouts of last year. You can definitely see the progression from Honey and Witchdance, through Gamma Ray and Higher Electronic States to the album. Always seen him as a bit of a kindred spirit to Weatherall- single minded and open to lots of different strands and able to tie them all together

Yep, definitely a kindred spirit to AW. When you take his work from the last decade as a whole you can see the progression and draw a line right from 2011 to 2019. There's a great potentially compilation album to made from it all.