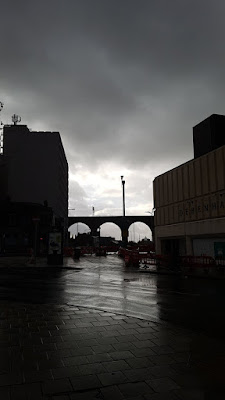 A month ago I put together an hour long mix of Durutti Column songs, fifteen of what Vini Reilly refers to as his 'silly tunes' (on the other hand when stopped at customs at some point in the past and asked by the border official what sort of music he plays he replied 'nu- classical modern jazz' so he can dress it up as well as dress it down). The songs on the first mix were all from the 1980s, from his first flourish with Martin Hannett and his work with drummer and Mancunian legend Bruce Mitchell up to the point where the sound was expanded with keyboards and viola. It's here if you missed it.

The second part has taken me a while to put together and starts where the 80s finished. As that decade ended Tony Wilson, Vini's biggest champion, manager and friend, bought him a car bootful of equipment- samplers and sequencers- and told him to get stuck in. This led to some electronic sounding albums and songs, the 1989 album titled Vini Reilly and especially Obey The Time from the following year. Into the 90s Vini expanded the sound again, survived the collapse of Factory, released albums on Wilson's short- lived Factory Too and then several other labels into the 21st century. His 2010 album Paean To Wilson was recorded as a tribute to Tony and an attempt to pull together a lot of what Wilson loved about them onto one album. In 2011 Vini suffered a stroke which left him very ill and with severe financial problems for some time. Recovery from a stroke is a long road and although Vini now seems much better his guitar playing is still recovering. This second mix, Sketch For Vini 2 isn't supposed to be a definitive summary of Durutti Column from 1990 to 2010, just some songs from that period placed together. It starts with Wilson's looped voice (the opening track on Paean To Wilson) and then dives into the samplers and sequencers of the early 90s (including the remix done by Together, a remix that wasn't finished but Wilson put it out anyway in the aftermath of Jon Donaghy's tragically early death in 1990) and then onto the the mid 90s and beyond. Vini's guitar playing was often more direct and heavier in this period, less of the nuanced, semi- ambient, Roland Space Echo sound of the 80s. He worked with vocalists including Poppy Roberts and Caoilfhionn Rose and always seemed to be looking to do something new and take his music somewhere else, even when the attention of the press and the audience of the Factory years had largely gone elsewhere. There's loads to enjoy in his post- Factory years, you just have to start digging. Sketch For Vini 2 is on Mixcloud here.

'In the end, I don't know if it's good music or bad music or indifferent music. I have no idea. I don't really care too much, it's done with and over with. People would say, why do you release it anyway, if you don't really rate it? The answer is, whatever music it is, bad, good, indifferent, stupid, boring, whatever, – it's truthful. At the time, it's the truth, and it's honest. There's no attempt to portray an image or a career or anything. It's what it is. And truth can be painful. It's about losses close to me, and about my own depression, but it's cathartic. But you have to be truthful. If you're not true in what you do, if you're creative, then you should forget it. All I've ever tried to do is be truthful.'

I bow to your excellence, Adam, another stunning mix. This period of Durutti Column is more familiar to me, but your choice of songs and mix is exemplary and shows them in a new light. Perfect, thank you.

Nice, Michael- all filmed around Fletcher Moss, the Mersey and Stenner Woods in Didsbury. An area I'm sure Vini knows well.

And referenced in the lyrics I've just realised!