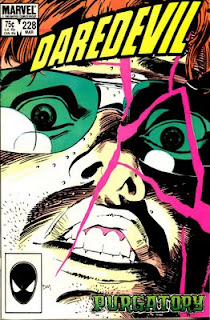 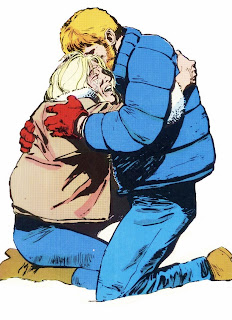 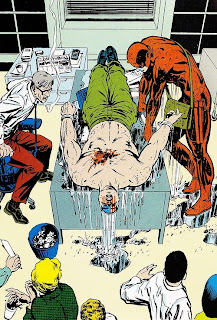 I was up in the loft the other day, which is full of boxes of stuff that have now survived two house moves. Getting up and down there requires some precarious balancing on the top of a step ladder, even more risky when hauling boxes up and down. I brought down four large boxes of comics and a biggish box of cassettes. In the mid 80s I was a big comics fan. I started as a young kid reading 2000AD and then moved onto Marvel and DC. I decided the time had come to sell them, especially as money is tight, there's a few things I'm after at the moment and raising the money out selling things seemed the best way to do it. Going through my comics collection (all filed in alphabetical order by title and then in chronological order, many of them in indivdual plastic bags) was a real Proustian rush job. I recognised some of the covers straight away and got a bit of a shiver, confronted with a much, much younger me. This younger me stared back in the shape of a few photo albums that came down as well. Look at a picture of yourself aged 17 and then tell yourself you haven't aged. I pulled out a few comics that I thought I'd keep (for, erm, sentimental reasons) including the run of Daredevil comics illustrated by David Mazzucelli (pictures above) and written by Frank Miller, a few X-Men, the full set of original Watchmen, a handful of others. The rest have gone up on ebay. The two big boxes (several hundred comics, buyer collects etc) sold pretty quickly. A run of Alan Moore written Swamp Things went last night and a pile of 2000ADs (variable condition) that have got some interest. I suspect the big boxes have gone to  a dealer who will make more money out of them than I have but I'm not going to start attending comic fairs and conventions to sell them individually and the amount I've raised will buy, ooh, that Clash Sound System boxed set for instance and a bit more besides. Although part of me is sorry to see them go, the rational part of me says 'they've been in the loft for twenty years, you'll never read them again- let them go'.

I also found a pile of Deadline magazines- an attempt to marry comic strips, satire and acid house. Tank Girl was Deadline's most famous character but there are interviews with clubby-comic crossovers and cartoon strips of 'real' people wearing MA1 flying jackets and ripped 501s (some by Jamie Hewlett of Gorillaz) with references to ecstasy. Strange days. I'm keeping these too.

The cassettes went up on ebay too- not all look like they'll sell but some Joy Division and New Order cassettes, My Life In The Bush Of Ghosts and one or two others have gone for anywhere between £2 and £8.50. These are albums I've got several times, in multiple formats. I'm slightly bemused that people will pay for two decade old cassettes (a pretty poor way to listen to music, let's be honest).

Cut Copy, remixed by Audrey from a year or two ago.

If it weren't for the Clash box I'd say selling this stuff is rather stupid!

And I'm saying this as a man being nearly as skint as 30 years ago.

I sold off all my stuff from that era a long time ago. Spent much of the last few years tracking down electronic versions. There's a lot out there. Got all my old Miller Daredevils, all the Byrne/Claremont X Men, the George Perez run of Teen Titans, Doom Patrol (Grant Morrison), a whole heap of Howard Chaykin works, etc etc.

I've still got stackfuls in the loft and around the house. But as a previous paper-only avid, the way forward is digital. Almost everything is out there.. I've bagged complete runs of Spider-Man (from Amazing Fantasy 15 onwards - all full copies with ad's and letter pages), as much Daredevil as you could want. Marvel, DC everything - and the new IDW Judge Dredd series - well worth bagging

Mail me at planetmondo@gmail.com if you need any info

Yup, as Mondo says, cbz/cbr files, which are essentially a scanned copy. Reading on a tablet, or even a smart phone is pretty damn cool, a complete run of a comic in one place, with no inky fingers. The only thing missing is that old comic shop smell.

Blimey, the early 80s especially music and comics were really tied together for me. I hear some of the 1981-1983 chart stuff and it's so evocative of sitting around with my best mate reading comics that it's silly.

Oh and on Twitter, one of my current fave people that I follow is Steranko. Some great stuff he's tweeting lately.

Funnily, I never really got into comics apart from 2000AD and the Commando books but never kept them. Come to think of it I never kept football programs either.

I don't have any pictures in the house of when I was younger, well pre-marriage.

I flogged all my comics in the 90s too. Were we all skint at the same time?

2000AD always makes me wince as I had the first several hundred in a box in the loft at my mothers. Or so I thought. I look a couple of years back and she'd taken them to a tip when tidying up.