William It Was Really Early Electrobeat 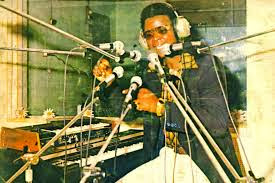 There isn't much information to go on with William Onyeabor. In the early 80s he recorded several albums of electro-Afrobeat which have recently been compiled and re-released (on Luaka Bop). It is the sunniest, funkiest, most groundbreaking Nigerian music I'm going to be posting this week. William doesn't talk about his music making past, presumably due to his conversion to Christianity. He also has been crowned a high chief in Enugu and lives as a successful businessman working on government contracts and running a flour mill. It says here.