I Had Dreams When I Was Your Age 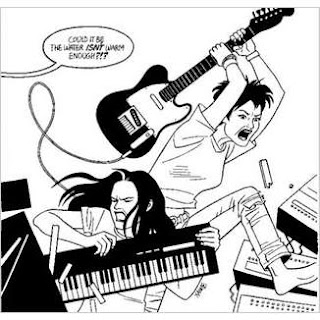 Back to yesterday's postees Wendy and Lisa (as drawn by comic artist Jaime Hernandez, thus cleverly tying in with the post about comics earlier this week). Wendy and Lisa escaped from Prince's sticky clutches in 1987, fed up with the way The Revolution were changing (too male, too macho, not enough credit). Staring At The Sun is a piece of summer-y, slightly psychedelic pop that could only have been made in 1990- just listen to those drums- and it appeared on their Eroica album. If truth be told I prefer the remix from The Orb but this has a good groove, a nice chunky guitar riff and cracking vocals.

Staring At The Sun

I'll probably get shot down for this but I never cared too much for Prince- I don't dispute the man's way with a tune early on, Purple Rain and When Doves Cry are, y'know, good and I did like Sign Of the Times (the song), and Cream and Get Off are funky. I don't believe I own much by him other than a couple of 7" singles that I must have been given at some point and an album.

I'm with you on Prince. Own none of his work.

SA, both this and last night's links go to a Permission Denied message on MediaFire : (

Hmmm, curious- I've just been able to d/l Wendy and Lisa at my end. Not sure what's going on Davy.

I can't download either. Not that I wanted too,of course.

I'm not a fanatic but I think Parade is great, just a very clear, cold sound.

Fucking love Prince and the fact that he really doesn't give a fuck.
Kiss and Sexy MF are brilliant dance floor tunes.

Although he did become a bit of a cock, however he was fighting Warner Bros and the strategy was to release any old shit because they wouldn't let him release the Black Album as a follow-up to Sign Of The Times, which is as funky as fuck. He won WB backed down and the Black Album was finally released in 1994, seven years after it should have been.