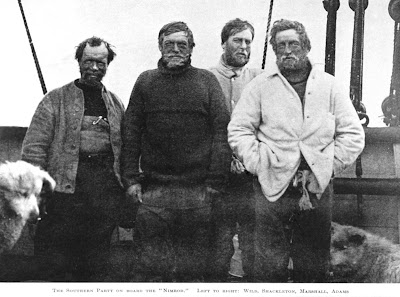 Explorer and pioneer Sir Ernest Shackleton, second left in the dark jumper, led the Endurance and its crew into the Antarctic in the winter of 1915. They were trapped by ice and lost the ship. Camping on the ice floe and in a twenty foot lifeboat they survived and were rescued in the August of 1916. Without a single man lost. That, reality TV show contestants, is a back story.

Explorer and pioneer Lovebug Starski began work in 1971 as a record boy and by 1978 was playing a key role in the nascent hip hop scene in New York djing and later producing and making records. he had a regular spot in the rooftop roller rink in Harlem during the 80s and made this record in 1983, which somewhat surprisingly was one of the key influences on Johnny Marr when he was recording How Soon Is Now? with The Smiths in 1984.

I'm not saying the two men's experiences were comparable. It just amuses me to put them together and I've got to do something to keep this whole thing blog thing interesting.
Posted by Swiss Adam at 08:00

Exactly - that's what I try to do on my blog sometimes too.

That photo is actually the line up of a new group featuring Mr Weatherall and Wild Billy Childish.