The Return Of Friday Night Is Rockabilly Night 120 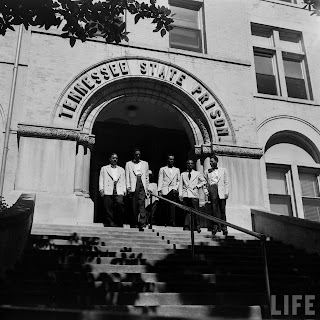 The Prisonaires' Just Walkin' In The Rain came out on Sun Records in 1953. An African American doo-wop group, the were all incarcerated in the Tennessee State Penitentiary when the song came out, for a variety of crimes, some not very pleasant indeed (two of them were doing 99 years apiece for murder). Sam Phillips heard them on the radio and arranged for them to be transported under armed guard to Sun Studios to record the song. It went on to sell 50, 000 copies. Following this they were allowed out on day release to perform on occasion, even singing at the State Governors mansion. Lead singer Johnny Bragg had been serving time for six counts of rape- one was later withdrawn and the other five had been pinned on him by a police force looking to clear up their books a bit. All five members are now deceased.

Cheer up! It's Friday!

Just Walkin' In The Rain
Posted by Swiss Adam at 16:30

I think that this is the same Johnny Bragg who recorded "They're Talking About Me",a northern classic.

I just clicked to listen but The Man got in my way : (