All You Need Is Me 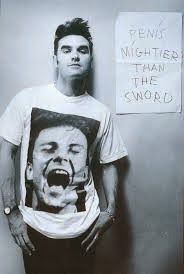 Morrissey's autobiography is out imminently via Penguin (Penguin Classics apparently). Long awaited I suppose you could say. There are several things I expect from it-

a) It will most likely be highly unreliable as a historical source
b) It will be both entertaining and irritating in equal measures (like Mark E Smith's book from a few years back- MES repeatedly, repeatedly, slagged off middle class tossers, music journalists and students- it became quite boring after a while- and hey, Mark, say hello to 90% of the people who have bought your records since the late 1970s)
c) Moz will use it to settle scores with all and sundry- Mike Joyce, Johnny Rogan, assorted former band members, record labels, journalists, the NME, other bands...

I will probably read it at some point though I will not be joining any queue to buy it at those outlets opening at midnight to sell it to the hardcore. I hope Waterstones have taken on extra security. This was a single a good few years back which had a good deal of swagger about it.

All You Need Is Me

I think you're right about the probable tone and scope of the book. Not interested in this. Or the Mark E Smith one. Aren't we in it for the music? I'm not at all interested in what they have to say, unless it's in their songs. And in the case of The Fall, I can barely decipher what he's muttering about nowadays. Delusions of grandeur, perhaps?

I'm looking forward to finding out that he is actually a secret black pudding fanatic!

You mean it won't be a love letter to Johnny Marr?

I dunno- there could be some unrequited love towards Johnny. Suspect Morrissey acknowledges that without Johnny he'd still be living in Stretford.

Think MES has achieved his object with you, Adam: wind up. You just mustn't rise to him, he loves it