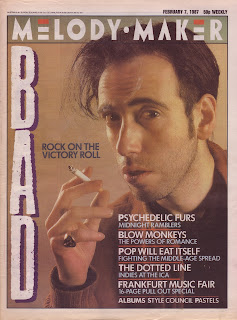 The early Big Audio Dynamite songs and lps are easy to praise and admire. Some of the later stuff seemed less so but I really like this 1990 song The Globe- Mick had been soaking up the club scene and this record reflects that in the beats, clipped guitars and the very early 90s rapping. The first set of musicians (Don Letts, Dan Donovan et al) had departed and Mick set out with a second group, named BAD II. The Globe's got a lot of charm and this song and Rush were both hits in the USA. It also samples Mick's Clash song Should I Stay Or Should I Go? which is probably very meta and must make sample clearance a lot easier.

Now I want to read that issue of Melody Maker! I wonder if I have it somewhere....

Ooh that IS good. I want to play it to all my hip-hop hating Clash-worshiping pals.