The Whole Of The Law 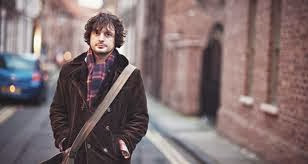 It's not often that someone who has played stadiums alongside the 'greatest guitarist of his generation' plays one of your local pubs- but such was the case last night as Chris Helme appeared at The Brooklands Tap for the princely entrance fee of £3.00. You can barely get a pint for £3.00 now so I thought I'd go down and have a look. Following his departure from the Stone Roses John Squire quickly put together The Seahorses with Chris Helme as singer, discovered while busking in York. I really liked the first single Love Is The Law and the follow-up Blinded By The Sun, written by Helme. A post album single followed which somehow I have managed to own two copies of on 7"- You Can Talk To Me- which I also really liked. Trad Britpop rock maybe, but with a decent tune and well played. Parts of the album Do It Yourself I cannot recall at all, in fact looking at the tracklisting I don't even recognise the titles.

Chris does his thing now as a singer-songwriter, acoustic guitar and beard, travelling light. He plays a mixture of those Seahorses songs, some Nick Drake influenced folky stuff and a couple of covers (The Faces' Ooh La La, No Expectations). He sings really well and gives the songs a real wallop. We were accosted by a young drunk mid-set who insisted David and myself looked like Ray Winstone and Danny Dyer respectively (not true in either case thankfully). Having sung on the main stage at Glastonbury you could argue that singing to fifty people in a suburban South Manchester boozer is a bit of a comedown but I suspect Chris has been through the wringer and just wants to play to anyone who wants to listen.

This is the full length version of debut single Love Is The Law (with its Crowley quoting title). The riff sounds like a good Second Coming out-take. The song is three minutes long followed by four minutes of John Squire playing guitar, long and loud.

Love Is The Law (album version)
Posted by Swiss Adam at 09:30

The Seahorses is one of the only things I like or care to remember about Britpop.