And Don't You Come Back No More 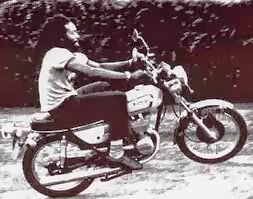 Today's song is from the mid 1970s, roots and rockers reggae's golden period, and celebrated deejay Big Youth (pulling a wheelie too- I could never get the hang of that). Hit The Road Jack was written by Percy Mayfield in 1960, possibly inspired by Jack Kerouac's On the Road (but opinions seem to differ on this). Ray Charles had a hit with it in 1961 duetting with Margie Hendricks- she kicks him out cos 'it's understood, he's got no money, he's no good'. Big Youth recorded his version in 1977- the year two sevens clash.

Hit The Road Jack
Posted by Swiss Adam at 08:00

I could never do wheelies. I'm thinking of getting a skateboard and discreetly learning not to fall off. Just for the satisfaction of mastering it.

This turned up on my back up drive when I was loading up the pod after it crashed the other week. I was sure I had more of his stuff, but no just this. It's good though!