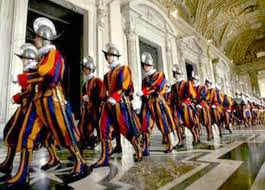 I always feel a bit bashful about doing this, because it is shameless self promotion, but mainly because you lot have such well developed critical faculties, are faultless judges of good music and might regard my humble musical offerings as, well, a bit shit- but here we go.

Swiss Guards, the band formed by myself and Mr HSD in 1997, have released a new e.p. of songs found in the Swiss Guards vault. Recorded about five years ago and gathering dust on a hard drive ever since, the Locusts And Honey e.p. can be bought for £2 from Bandcamp. I can't really review my own work in any real sense but there are two guitar based songs- Melancholic Streak and Stalactite Rock- and two electronic songs- Locusts And Honey and Heart Beating. I'd like to think they are worth fifty pence each and that you might find something to enjoy. I'm saying no more than that.

Excitingly though we are to be played on the radio tonight. Yes, tonight. On the radio. Moorlands Radio (103.7fm), serving the Staffordshire moorlands area have a show on at 9.00pm called Left Of Centre hosted by Gary Wilcox, playing stuff from the left of centre, the nether regions, the left of the dial. I am actually quite excited. You can listen here.
Posted by Swiss Adam at 19:54

It somehow reminded me of The Spacemen 3. Is there any more locked vaults?

Cashing in on your recent upsurge in popularity Adam?
Shame on you!!
Now we know where you got the moniker

Well done Adam!!
Really like the dirty boogie of Melancholic Streak and Locust & Honey is Electronic of the now (to use a hipster term)!
Purchased!

Thanks Echorich, kind words- you're a gent.

And thank you too.