The Return Of Friday Night Is Rockabilly Night 124 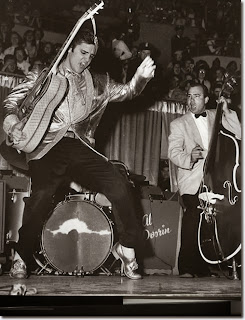 October 25th is also my wife's birthday- I hadn't forgotten this morning, no no no, I just thought I'd link it to Friday night's rockabilly post rather than this morning's John Peel post. So- happy birthday Mrs Swiss, this song is for you.

Elvis, as Chuck D said, was a hero to most but he never meant shit to me... well he never meant shit to me but all the same he never meant a massive amount either (or is that the same thing? Now I'm getting confused by Chuck's double negative). He was rockabilly in the 50s though even if he very quickly became something else entirely. His songs recorded for Sun are great, full of swing and raw guitar parts. Like this one from 1955, written by Arthur Gunter.

That's exactly what made him famous: His voice combined with that swinging and mean guitar.

Hearty congratulations for the birthday from Mrs. Swiss

I only have one Elvis LP and it is The Sun Sessions, because I am a Boss.

You need more than that. I have an old comp album called 'Reconsider Baby: Elvis Sings The Blues' which I highly recommend.

Oh yes, I've got one of those all career comps on iTunes that I borrowed from the library. But only one actual record.

There a few good Elvis albums not least From Elvis In Memphis. The new Elvis at Stax is brilliant too.

The only vinyl Elvis I've got is the Sun Sessions. Got a couple of cd comps (one a gift from someone, one bought) and the Sun Sessions again on cd. May check out the blues one.