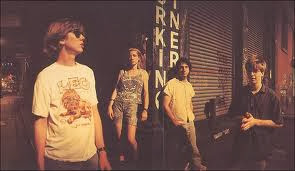 So we skip seamlessly from Big Youth to Sonic Youth. I've got several Sonic Youth records but when it comes down to it the only one I need is the opening song from their 1987 double opus Daydream Nation, an album that seemed to signpost a new big thing. Fact is, whenever I think I'm going to listen to Daydream Nation I never get any further than playing Teen Age Riot three or four times. That's not to say that the rest of the album hasn't got anything going for it- it has- but the rest of it isn't Teen Age Riot. It's Sonic Youth's perfect moment. I can make a case for Death Valley '69 and much of Goo (I love Dirty Boots) and some later stuff like Murray Street and also some of Ciccone Youth (they've got a good way with covers- their versions Neil Young's Computer Age and the Carpenters' Superstar are both superb). But Teen Age Riot is head and shoulders above- from it's smoky intro with Kim Gordon intoning blankly to the riff and then Thurston's half-spoken, half-sung vocals, a tribute to sloth king J Mascis, and the whole effortlessness, pre-slacker controlled noise of it all. US indie-punk cool.

Of course sometimes they're insufferable obtuse as well, noise-for-noise's sake, music from the head rather than the heart or the loins. Record collectors and rock critics let loose in an instrument shop. I suppose I shouldn't carp- many bands don't make one song that'll be remembered twenty five years after it was recorded.
Posted by Swiss Adam at 08:00

I agree SA, Sonic Youth did their masterpiece with DN and it's nearly impossible to beat Teen Age Riot

I agree this is them at their best.

this song said it all when your 17. chimed with Celebrated Summer. the video was brilliant too. a scrap book of all the shit that seemed important to like when 17 in 1987. Total trash and Erics tip were of course brilliant too. And while the moanage about the noice stuff is correct they had some great later stuff like rain on tin. its important this stuff.

'Chapel Hill' from 'Dirty' too.

What a song. Daydream Nation was the first CD I ever bought. Teenage Riot is their masterpiece.

At times Eric's Trip, Cross The Breeze and Kissability have been my favourites. But yes, I heard Teenage Riot the other day (on the telly I think) and it just stopped me in my tracks.