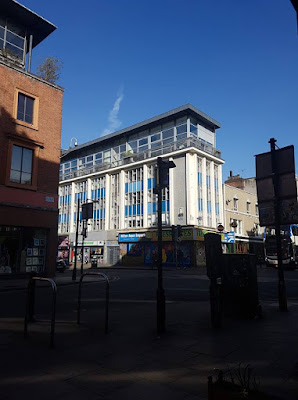 I keep being reminded of this 1990 song from Manchester group The High. Box Set Go, chiming guitars, a sense of urgency and sweetly sung vocals, was their debut single recorded in Stockport's Strawberry Studio with Martin Hannett at the desk. According to legend Hannett set drummer Chris Goodwin off playing, was puzzled about an issue with the overhead ambient mics, and then went to the pub for two hours (unknown to Chris who kept playing). Suitably refreshed Hannett returned to solve the problem- he kept the two mics part by wedging a cigarette end between them. Someone had used the wrong brand of cig butt- Embassy No. 1. Problem solved, drum sound fixed. Box Set Go is one of the minor gems of the period, not quite a lost classic but far off it, gently psychedelic guitar pop.

Box Set Go opens the group's debut album, the still wonderful Somewhere Soon, a record with three top drawer singles (Box Set Go, Up And Down and Take Your Time) plus some great album tracks (Rather Be Marsanne, PWA, Dreams Of Dinesh, A Minor Turn and the title track) and percussion from Pandit Dinesh that gives it something other guitar-based records at the time didn't have.

The High signed to a major label after just one gig at The Ritz. Guitarist Andy Couzens had been pushed out of The Stone Roses by manager Gareth Evans before the release of Sally Cinnamon, his guitar playing inspired by the twin influences of Steve Jones and Roger McGuinn. He put the band together with drummer Chris (both had played with Buzzcocks FOC), bassist Simon Davies and singer John Matthews (from One Summer). The songs came together quickly. In the great indie guitar group boom of the early 90s the pressure to have hits was intense and despite endless touring and singles of the week in the music press, the big hits never really came. More's the pity in a way because there were lesser groups who sold more records but this album remains a wonderful, less well known snapshot of the time and still stands up today. This footage of the group at Strawberry is good, the Hannett version of Up And Down ringing out and Hannett engrossed in an instruction booklet about DAT.

Things went awry afterwards. The single More..., a should-have-been-a-smash follow up to Somewhere Soon, was derailed by allegations of chart rigging. John Matthews was hospitalised after an incident with an industrial quantity of psychedelics. An ill advised second album with a heavier American rock sound was released but the momentum had gone and they parted company. And despite the stories of failure or missing out, the songs remain and in the end that's what matters the most.

I loved that first album and More. I've got a 12" of Hannett mixes on a couple of different versions of the 12" singles. They should have been better known

Blimey, I've not heard that in years. Listening back to it now, it sounds like the Lemonheads.