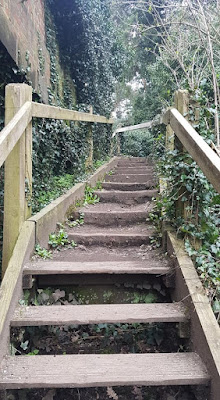 I got into R.E.M. in 1987 or '88 and then was able to swallow the IRS years whole and rapidly- the run of albums from Murmur to Life's Rich Pageant seemed cheap at the time so their back catalogue came at me in rush and I can't remember the exact order I bought them but I think it as something like this- Document first, then Reckoning before Murmur (which is the wrong way round obviously) and then Life's Rich Pageant, the B-sides compilation Dead Letter Office, a treasure trove of oddities and offcuts, followed by Fables Of The Reconstruction. Reckoning made a deep impression on me, the beautiful chiming guitar lines and riffing, Stipe's unintelligible, enigmatic and strange lyrics, Mike Mills' bass playing and the backing vocals from Mills and Billy Berry, all wrapped around some really strong songs, moving, melancholy odes to people and places in the USA in the mid 1980s, a world away from the USA we saw on the TV- Ronald Reagan, Miami Vice, Hollywood films about Vietnam, Moonlighting, shady government activities in Central America on the news. R.E.M.'s songs were about small towns called Rockville, how Stipe would rather be a camera and letters he never sent, central rain and second guessing. Poetic and full of yearning but countered by the powerful Byrdsy/ indie punch of the band.

On  Dead Letter Office  you can find the song Voice Of Harold, the music from Reckoning's 7 Chinese Brothers but with a completely different vocal and lyrics. The story goes that producer Mitch Dixon was struggling to get a usable vocal recording from Stipe, who was burned out from the constant touring and a diffident and reclusive person in the studio. Dixon became increasingly frustrated about Stipe singing so quietly he couldn't be heard on the tape, climbed a ladder above the vocal booth and dropped an album in that happened to be in the studio- the album was a gospel record from the 1970s called The Joy Of Knowing Jesus by The Revelaires. Stipe began reciting and singing the liner notes and then warmed up and inspired he went on to record the vocal for 7 Chinese Brothers.

Voice Of Harold is one of my favourite R.E.M. songs, there's so much mystery and plain oddness about the words and Stipe's phrasing of them. Back in 1987/ 88 they made as little sense as anything could and still sounded so full of importance. The liner notes of The Joy Of Knowing Jesus are a puffed up promo piece, extolling the virtues of the singers not least the 'pure tenor quality of the voice of Harold Montgomery', and 'the power of [the album] to mend a broken heart or straighten out your life through the sincere testimony in the songs of The Revelaires/ A must!' Stipe sings the words like his life depend on them, pouring his heart into them and as a result unlocking something he wasn't able to before.

The granddaughter of Harold Montgomery is fairly active on various internet forums. It seems at first the family were unhappy with the release of Voice Of Harold but have come to terms with it over the years and now sell vinyl copies of the album for hundreds of dollars a copy.

After singing Voice Of Harold Stipe sang 7 Chinese Brothers, a song that made no more sense to me lyrically aged seventeen or eighteen than Harold did. I was always into the words/lyrics/ poems but with R.E.M. the meaning of individual lines or entire songs never seemed to matter that much, the stream of consciousness/ babble/ imagery could be taken at face value, a wash of words coming out of the speakers that went with the music. It sounded like Stipe meant whatever he was singing and that was enough. The opening line of 7 Chinese Brothers was arresting if ungrammatical (not that that mattered), 'the smell of sweet, short haired boy/ woman offers pull up a seat' but after that it was anyone's guess. No internet lyric sites to help out. Michael has since explained that the song is about a couple he broke up and then dated both halves of, the boy and the girl. The chorus, the seven Chinese brothers part, is based on a children's book about five Chinese brothers, based on a traditional Chinese story. Each brother has a different supernatural ability, one of them the power to swallow an ocean. This greed leads to his death- I guess Stipe finds a parallel between the greed of the brother and his own greed in wanting both of the couple he broke up.

Reckoning stills sounds really special to me, ten songs that whizz by in a blur, pulling at the heartstrings and reminding me of the teenager I was. I don't think it's my favourite R.E.M. album or their best- of the albums from their early IRS years  Murmur has an even deeper sense of mystery and is full of all the things that made them so special. Fables Of The Reconstruction has songs that I still find beguiling and I love it's murk and muddy edge. Life's Rich Pageant is rousing and less oblique, full of mini- anthems for outsiders. But it's got something that marks it out, an energy formed by being a good band constantly playing live coupled with confident songwriting and playing and a genuinely brilliant singer finding his voice.

I remember sitting in halls, listening to the opening bars of Harold and trying to impress the slightly older, slightly cooler American girl I was listening with by my instant recognition of a great song. This is not what you think, she replied, immediately reminding us both that she knew REM much better than I. I caught up fast though.

This is ground we have covered before here and and elsewhere, but the two of us came in at different moments and have had vastly different experiences with R.E.M. Reckoning is where our Venn diagram would intersect, however, and you have focused on two of the band's best songs today. This album and Murmur have been firm favorites for almost as long as I have been buying records.

You and I are about the same age and got into R.E.M. at the same point (end of '87 in my case). Like you, working backwards from Document was an exciting and ultimately rewarding prospect. I just never quite got into Reckoning like I feel I should have. I played Dead Letter Office much more frequently at the time.

To this day, Reckoning is my 6th favourite album from the IRS era.

Martin- I can picture the scene. Brilliant.

Reckoning is the one for me. The depth and emotion on their sophomore album is still stunning to me. so. Central Rain is still the band’s high water mark for me. But 7 Chinese Brothers and Pretty Persuasion are hard to beat. (Don’t Go Back) To Rockville is the point where R.E.M. took all the Southern/Folk Rock that came before and put the stamp of a new generation on the sound. I have always imagined how interesting it might have been for The Byrds or Gram Parsons to interpret Rockville in a sort of history in reverse kind of way.