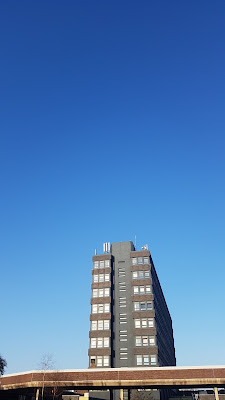 Back in 2014 Underworld released a deluxe anniversary edition of 1994's dubnobasswithmyheadman album, a double CD, the original album coupled with a disc of extras. dubnobass... was one of the 1990s greatest albums, possibly its greatest- a visionary, triumphant, darkly euphoric ride, dance music's rhythms, space and production (and the DJ nous of recently arrived member Darren Emerson) hitched to what was left of Karl Hyde's guitar playing and Karl's cut up vocals. Melodic streamlined techno. The sleeve suggested what was within, words typed and repeated, overlaid, copied and pasted in layers of black and white, a computer having some kind of breakdown.

The extras disc is a brilliant alternative eighty minutes to the album, a collection of earlier releases, standalone singles and off cuts from the album. It opens with the stellar Eclipse and includes Dirty (both from the Lemon Interrupt 12"), Rez, a standalone 12" and maybe their single greatest moment (without doubt one of the weirdest moments of the 2012 Olympic Games opening ceremony was when it suddenly became clear that the athletes of the world were parading round the Olympic stadium to Rez), Spikee (a 1993 12" single), the sinuous, epic Dark Train version of Dark And Long and three tracks that were recorded at the same time as dubnobass... but which didn't make the final cut. Of these three extras- Concord, Can You Feel Me? and Birdstar- Concord sounds like one which could easily have sneaked on if running time had allowed. It opens with a distorted voice, unclear and smothered in echo, before a familiar thumping, heartbeat rhythm glides in and Karl's spoken voice starts out with one of those stream of consciousness vocals, lines from notebooks and overheard conversations, 'I'm delighted/ I'm higher than Concord'. A moment later then he seems to be switching through the news channels, 'it's an honour for the home team... rebel forces massing in Georgia... huge fat prices... here comes  Moscow... Mother Theresa's ready... It's an all time low... higher than Concord...'. On and on it goes, the thump of the drums, the warm fat bass and Karl flicking through the news and reporting back, beautifully disorienting.

A classic album, but I find myself going back to the extra disc more often, some classics on there. The deluxe versions of Second Toughest and Beaucoup Fish are also
well worth a listen