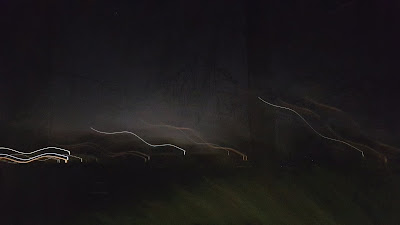 In 2013 Andrew Weatherall and author Michael Smith collaborated on a project called Unreal City. Smith, a Hartlepudlian, arrived in London in the mid 90s and drifted round parts of East London that had yet to be re- generated. In The Giro Playboy, a book published in 2006, and again in Unreal City he laments the loss of pubs and homes and communities to the forces of gentrification. In Unreal City the narrator, a broken down middle aged man living in a beach hut in Kent returns to London, walking the Thames estuary back to his old stomping grounds and sees everyone gone, the artists and painters and sculptors who used to live cheaply in rundown parts of the city. Smith's narrator is a flaneur, a person who strolls about and wanders the streets observing people and life. In the novel Smith describes London as both an outsider, a Yorkshireman, and as someone who had lived there for years and his love of London, it's streets and people, is evident- the novel rambles a bit, there is mood and texture rather than action and plot. Eventually the narrator heads to Paris and then back to London. It reads like listening to a stranger in a pub mid- afternoon, mid- week.

Michael Smith is a regular performer, doing readings of his work. At some point Andrew Weatherall and Smith met and a collaboration was hatched, Andrew and cohorts providing a musical backing for Smith reading parts of Unreal City in his distinctive, lugubrious, East Yorkshire tones. The music, written by Weatherall with Nina Walsh (with some accompaniment from Franck Alba on viola and E- Bow) is a series ambient pieces, drones and drawn out sounds, acoustic guitar parts appearing and then being swallowed up, ringing noises, drips and droplets of water and acres of echo and reverb, in places achingly beautiful, the perfect musical illustration of Smith's melancholy.

The paperback edition of Unreal City was published in 2013 and followed by a multi- media version- a loose leaf book with Andrew Weatherall's scribblings in the margins and some great pen and ink line drawings, a six track CD and a 10" single with a remix. It's a beautiful artefact, the sort of thing that shows love and care and attention to detail. Unfortunately if you don't own a copy, the ones at Discogs being offered for sale will set you back well over £100. The paperback can be found for under a fiver.

I've put the seven tracks together as one continuous piece and uploaded at Mixcloud.

Thanks, Adam. I was overjoyed when the Mixcloud alert popped up as I logged on this morning and got to listen to this for the very first time. As you say, a secondhand physical copy of the CD & 10" is well beyond my financial reach, so thanks for sharing. It's even better than I imagined it would be.

over 100 quid. I'm sure I didn't pay more than 20 quid for mine. More "grubby little opportunists"

Thank you very much for sharing this.