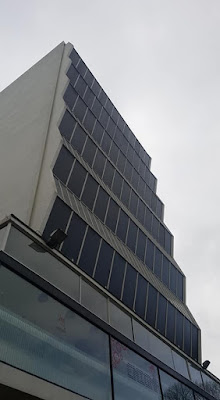 It turns out that Ghent, Belgium is the actual centre of the dance/ Balearic/ electronic/ indie/ disco world, the place where all the lines converge. Rheinzand, a trio from that town, made one of last year's best albums, a cross pollinating, shiny, slinky record, vivid, alive and brightly coloured that pushed all the right buttons and sounds equally good played through headphones while walking, in the car while commuting or on your home stereo system at volume. Strange World is a builder, growly and insistent with some Spaghetti Western whistling and a red hot slow motion glow.

A four track remix EP came out recently with four different songs from the album tackled by four different, sympathetic remixes- Hardway Bros, Red Axes, In Flagranti and Richard Sen. Sen's version of Strange World is here at Bandcamp, a ten minute odyssey built around an acid house sequencer and drum machine, making the song more streamlined but just as out there. Bells ring, strings swoop, the bassline hypnotises, drums pad away.