It's Been So Long And We've Come So Far 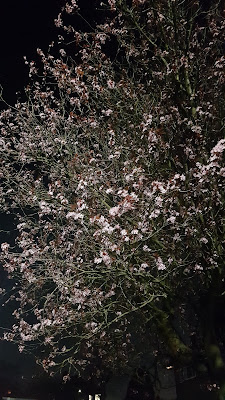 This Friday last year was the day schools closed to all but a small number of children of key workers. I vividly remember taking our Year 11's final assembly and then sending them on their way, their last year cut short, no exams, no prom, no 'proper' leaving, the rites of passage truncated. Three days earlier our son Isaac had been told to begin shielding and that's where he's been ever since, cut off from the rest of the world. I remember feeling last March that we were in this for the long haul, that the school year was probably going to be seen out in lockdown (and biting my tongue when some of the kids suggested that they'd be back in a few weeks- some adults too seemed to think that three weeks lockdown would be enough to see Covid dealt with). But to be here a year later, still in lockdown, is still hard to fathom. A whole year. In this part of the country, apart from a brief spell last summer when the government paid people to go to restaurants and spread the virus, we've been living under some form of lockdown or tiering restrictions ever since. A year of living in lockdown has taken its toll on people in all sorts of ways but it also shows that people can adapt and get used to anything if we have to and that most people do see that in extreme times sacrifices have to be made for the greater good.

I've kept up my habit of walking most evenings. Sometimes now there's still a bit of light in the sky, the dusk pushed back a little further every day. I noticed two nights ago while walking round in the dark that the blossom has suddenly appeared on the trees. I've started listening to music while walking. It's a good distraction- otherwise I just go over frustrations with work or whatever in my head and come back having had some exercise but not really feeling any mental benefit. Listening to music through headphones always adds a slightly cinematic feeling to walking, the music wrapped around your head like a personal soundtrack. This song by Ride came on in my headphones two nights ago and it floored me, the combination of guitars, waves of FX, the twin vocals and that drop out part, when everything falls away to just the grungy bassline. The lines, 'Always keep your eyes on the pulsar/ Guiding you home from wherever you are/ We're on our way home from another star/ It's been so long and we've come so far', were almost enough to move me to tears- the potency of pop music eh?

I can't think of any other bands who have reformed in middle age and who have done it as well as Ride. I wasn't too fussed about them first time around. I bought their debut EP and then a couple of others from the first shoegaze phase but lost interest after that. Their re- union hasn't been just for the payday, a jaunt around the heritage circuit playing the greatest hits. They've recorded two albums and several EPs/ singles that are better than the ones they made as young men- songs from Weather Dairies like Lannoy Point, All I Want and the superb lost summer shimmer of Cali, Pulsar and Cold Water People from Tomorrow's Shore and Future Love from This Is Not A Safe Place to list but a few. They've done it right- a sense of unfinished business, with age and experience and a determination not to get it wrong twice.

Schools are still closed here (we marked one year on March 11), but we have had some movement. Kindergarten and first graders have started back in a hybrid model. All public school students, even middle and high school, have been ordered by the governor to have have at least 10 hours of in-school instruction per week no later than April 19. They are bringing them back a couple of grades at a time. Our teachers have been vaccinated, but there has been some union pushback. I'll let you know how it progresses.

With you on both schools and walking Adam. And as for Ride, talk about a band reforming with a fire in their belly. The two albums and EP are without doubt the best things they've ever done, and they have really excelled as a live band too. Much more nuanced, but more muscular than on record. Well worth seeing them if we ever get back to a situation where a couple of thousand people sweating in close proximity indoors is deemed acceptable

When they sent us home before March last year, my boss was certain we'd be back in 2 weeks. She's been on a rolling two weeks ever since - we'll be back in September, in November, after Christmas... but even she has begun to hedge her bets now.

I missed Ride the last time they played Manchester, can't remember why, think it clashed with something. Would definitely go to see them if/ when they pass through again. This is good

I loved them the first time and have returned fighting fit. Saw them a couple of years ago, amazing live. The version of Seagull they do now is beyond words. Psychedelic!

Working at home and looking out from the front of house, you'd have been forgiven for thinking lockdown ended weeks, if not months ago, watching people come and go from each other's houses and completely ignoring social distancing. We live in out in the sticks and there's a definite sense of "it doesn't apply to us" that has really made me see this 'community' in a different light.

Likewise, walking has been really important though I've found it much more difficult this time to keep it going on a daily basis as I did for lockdown #1. Most of my walks have been soundtracked though there are points - particularly an early morning sunrise walk - to just stop and listen to the world around me.

I wasn't particularly interested in Ride first time around, though Carnival Of Light piqued my curiosity. Having heard Lannoy Point and now this in the past few months - as well as the Andy Bell/GLOK showcase - has opened my ears. Listening to the more recent songs on their You Tube page, including the beautiful Jump Jet (Reimagined by Pêtr Aleksänder). Awesome stuff.

I 100% agree with you about the surprisingly high quality of their material since they reformed, and I was fan of them first time around. Generally, I dread it when a band reforms and announces they will be releasing new material; I'm fine with them reforming to cash in on the nostalgia circuit, play a few gigs, trouser a few quid, fine. I mean, does anybody really think Pixies 2.0 is anywhere near as good they were back in the day? No, of course they don't. Ride are, rather wonderfully, the exception that proves the rule and long may they continue.

Personally I thought Pixies had gone over the crest of their wave when Trompe le Monde came out although I know many people love it. Pixies 2.0 don't do much for me. I'll stick with Surfer Rosa and Doolittle for my Pixies fix.

GLOK and Andy Bell's solo stuff are on heavy rotation at Bagging Area and have been for some time.

And thanks Michael for that version of Seagull.