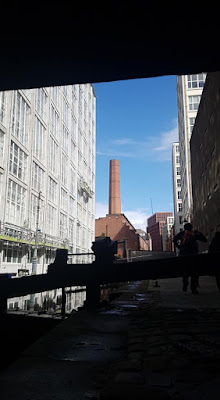 A new compilation from On U Sound rounds up some oddities, rarities and unreleased versions from the New Age Steppers tape vaults. On U Sound's re- issues of African Head Charge's albums and the similar unreleased extras compilation from last year, Churchical Chant Of The Iyabinghi, were essential purchases and this covers similar ground although Ari's presence and the post- punk anxiety and dissonance give many of the tracks on Avant Gardening an edge that makes this sometimes uneasy listening.

World Wide Version is a dubbed out version of My Whole World from 1981's Action Battlefield, bass and FX providing the foundation for some Eastern tinged clavinet courtesy of Kishi Yamamoto. Previously only available on the 2004 Japanese re- issue of the album

On U Sound labe had such a big impact on me from the mid 80s onward and still does. I first found them through the mighty On The Wire and my friend Gez, many thanks are owed to both for introducing me to so much music.

On The Wire is so important in terms of influential leftfield radio.