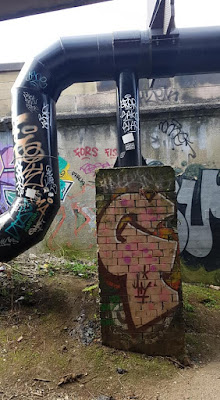 A double post of ambient weirdness from post- industrial lockdown England. Craven Faults are a Yorkshire based outfit who make industrial ambient pitching up somewhere between 1970s West Germany and 2020s West Yorkshire. Walks across the countryside to see decaying mills and workshops turned into music using an array of modular synths, keyboards, organs, pianos and drum machines. A three track EP called Enclosures is out in physical formats now, available at Bandcamp and led by the ten minute trip of Doubler Stones.

Further south to the East Midlands and a city which was under lockdown and tiered restrictions longer than anywhere else in the UK. Leicester duo Smoke Test send out dark, ambient transmissions built using a similar sonic arsenal- synths, found sounds, noises. This isn't ambient as a calming, music for healing experience but uneasy ambient, a wordless shout into the void. They've just released their second album, cunningly titled Volume II. Opener Tender bubbles around for four and a half minutes, loops building and folding in on themselves with a touch of acid in there. The Owl Sanctuary is a disquieting walk at dusk, birds chirruping. Wasted Time, echoes bouncing around the inside of a container, is anything but. Buy it here.

Was going to buy that Craven Faults record but £7.10 p&p is ripping the pish, especially with the post at present. Good stuff though

Yeah, made my eyebrows raise a bit too.

The whole Craven Faults back catalogue is well worth a delve - as you say Adam, halfway between an ambient synth outfit, half cosmische tekkers